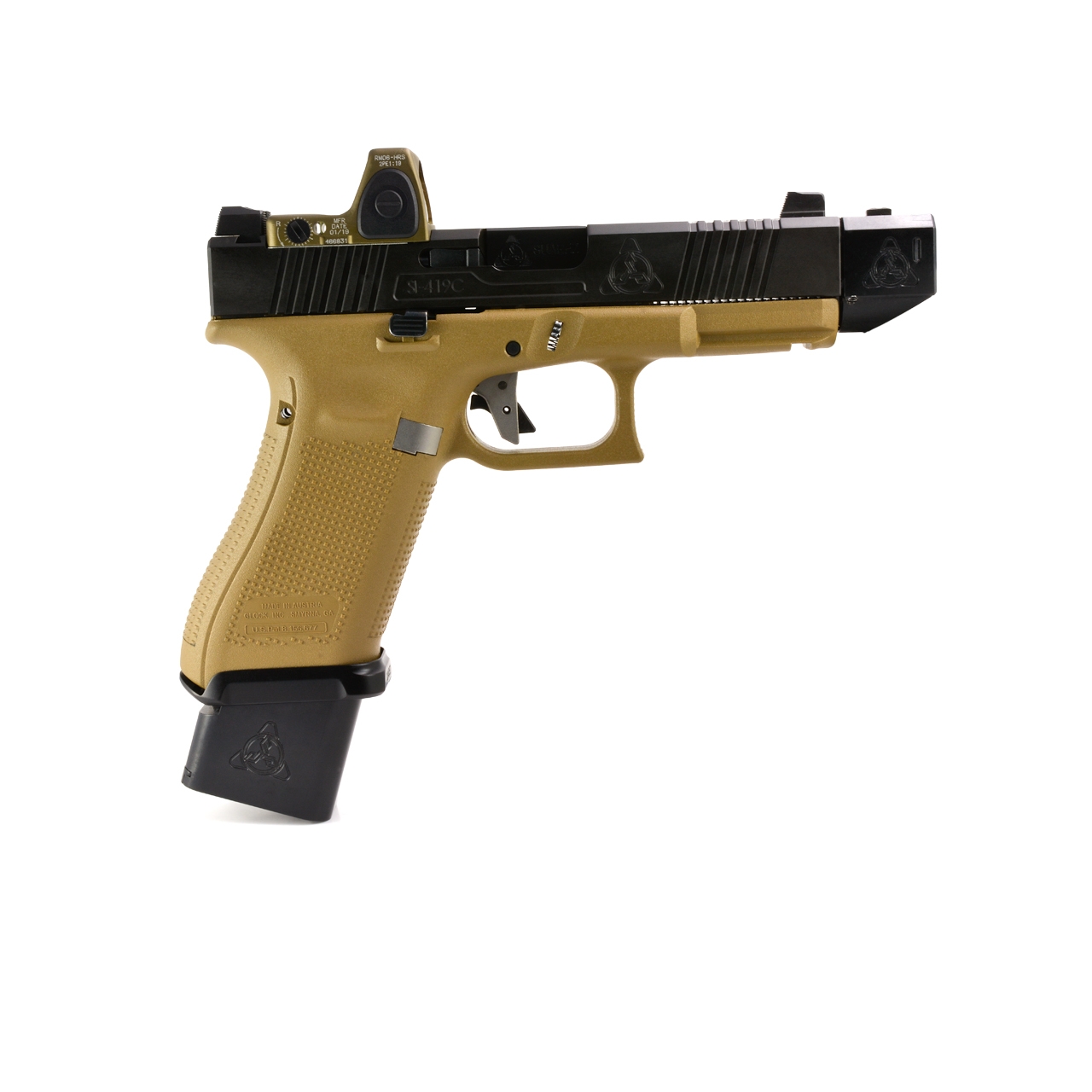 A DISCUSSION OF COMPENSATORS

This last weekend I had two of my personal pistols in class for the students to try. Everyone that fired one had a similar response. They fired...then they looked at the pistol to make sure it had worked. Then they fired again, with an "Oh...oh wow". Then the tracked the dot visually as they ripped off the rest of the magazine into a ragged hole. Both of my pistols were fired possibly 250 times each with varying types of ammo from the students and there was not a single malfunction.

Why is this important and significant?

Part of the challenge of using a handgun well in a fight involves controlling muzzle flip. Muzzle flip is the action of the bore as it climbs up and away from the target upon ignition. No matter how hard you grip and how massive and powerful your forearms are, the muzzle will flip upon firing. This reduces the speed with which you can accurately fire a second round, as the weapon must return to alignment point and the sights recovered visually before firing again.

The other factor is that recoil and muzzle flip sometimes causes the pistol frame to move in the hand of a less skilled shooter. I often see students in class readjust their grip after a few shots. This not only reduces the ability to maintain a long firing string, but also in shot to shot accuracy. We like to think it is enough to tell the student to "get stronger", but there may be reasons why that will not happen such as age, injury, or simply that there will be a need to spend the time to gain that additional strength...it won't happen in class. The Street Compensator reduces that muzzle flip to where it is negligible, even with a single hand holding the weapon, or with a reduced power grip as might be evident with an injured shooter. Thus, a compensator allows for an easier job in firing the weapon under normal conditions as well as under duress.

How is a comp different from barrel porting?

Since ports are machined into the barrel itself, as evident in the old Glock "C" Models or the old Aero-Tek ported Glocks, a ported gun reduces the velocity of any ammunition run through it. Porting has the risk of shaving the bullet by a port as it passes through the barrel. This creates a true hazard as lead and jacket fragments are sent upward and backward toward the shooter. It is from ported weapons that the myth that a compensated pistol is impossible to fire from retention was created. The compensator does neither of these things. The unit is secured to the full length barrel so no velocity is lost and there is no potential for shaving bullet particles upon firing. Firing a compensated pistol from retention position is quite safe.

Loss of night vision is another myth. If using modern anti-personnel ammo...which is often loaded with military grade flash retardant powder, flash is negligible. When shooting our Street Comps at night, there is a slight glow evident in the comp, but not any brighter than the flash seen at the muzzle of a standard non-compensated pistol.


There are those who will sneer at a compensated pistol in the same way they sneered at the notion of putting a red dot sight on a pistol to be carried on the street back in 2009 when we began the red dot journey. "That will get you killed". "It will never work". "You wanna put a $500 optic on a $300 pistol?" Ten years later we ask - "How about now bitches?"

Look...you either decide to use technology and advancements to help you express your skill better, or you decide to live in the past. If you are the former, I will tell you right now that adding a properly designed comp...one intended to use full power springs and for use with anti-personnel ammo, will enhance your performance to an extreme.