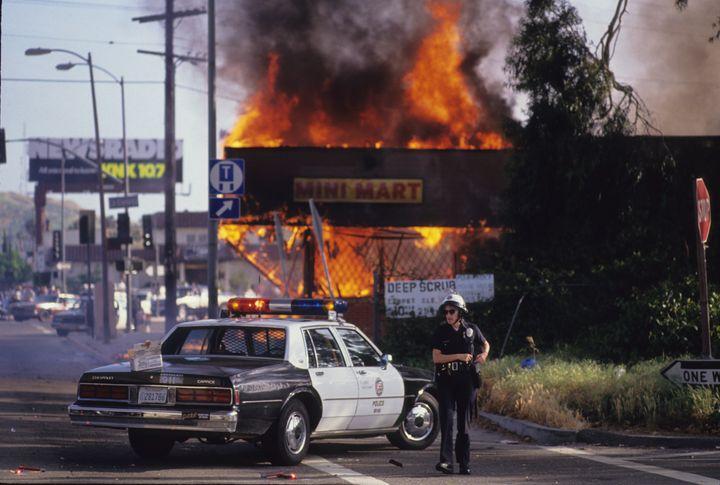 The city looked like it was on fire. My partner and I had rolled in from the Valley. We had not been called in, but we saw it on the television. No justice - no peace...as it were. We had arrived after the initial deployment. Everyone was in full blue uniform, like a poster. We'd been working a special detail and our grooming standards had been somewhat relaxed. We had reported to the Special Enforcement L.T.

"You know what...why don't you guys grab an unmarked and patrol the periphery of the city...take Jones with you...and stop by the armory and take whatever you need". He tossed over the keys to the kingdom, held by Command Staff only.

We had stopped in and grabbed an MP5 for each man, plus as many magazines as we could and still look natural. A few bangs and even a couple of 5.56 rifles with magazines balanced our load out. That these had not been grabbed up bore witness to the beginning of the softening of police work. We loaded up the navy blue Crown Vic and we were off...to the periphery.

The city was approximately ten square miles bordered to the north by Malibu and the west by the Pacific Ocean. No driving taking place in the ocean and surfers don't riot. We focused on the south and east...West Los Angeles and Venice. And then we went further and further...and further. Just how far is a periphery? Or the periphery of the periphery?

Like PBR Street Gang we kept driving further and further out...and nobody asked our 10-20 or status. Unlike Willard, we were there to get out of the boat. (If snowflake readers don't get the reference, Google it).

We stopped by a National Guard Unit that had rifles but no ammo or magazines. Well...there went most of our 5.56. We ran into a group of officers from various agencies that had come in to help LAPD. They had engaged some bad guys in a building and were pinned down. We "assisted" them and reduced our gross vehicle weight. When we were no longer taking fire everyone assumed the threat had been neutralized. And there was nobody to call so everyone went their own way.

At one point we pulled up to an intersection and next to us was a low rider vehicle with a number of 18th street Vatos. I was riding shotgun and the vehicle with the vatos was on my right. The hard looks we were getting could have broken the glass. We all knew what was going to happen.

I looked over at my guys and asked, "You ready?". Everyone nodded in return. I rolled down my window, looked the Vato in the eye...raised the muzzle of my MP5 level, winked, and blew him a kiss.

Eventually we rolled back into the HQ parking lot a day later. The fires were now smoldering. The call for "healing" was everywhere, and our navy blue Crown Vic was much lighter when we parked it than we first drove out some 36 hours earlier. Nobody asked about the two bullet holes.