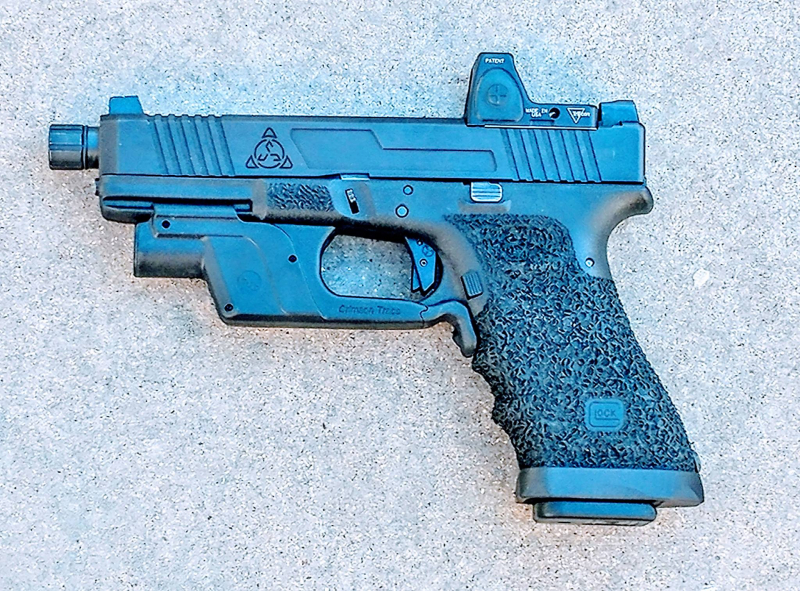 Adding a Laser to Your Pistol

There are a couple of points we must make at the beginning of this discussion.

First: Our goal, whether in training or in building equipment, is to optimize the fighter and his equipment. To make both as adaptable to changing situations in context of the real fight as possible. We base our positions and perspectives on the lifetimes spent by our staff studying and applying force in the real world against enemies bent of hurting innocents. There is nothing theoretical or sport-based about it.

Second: Nothing is perfect, and nothing is free. All weapons and sighting systems are designed and fabricated by men and anything man-made can, under certain circumstances, fail or malfunction. Certainly, more robust systems could be made, but everything is driven by the desire for profits. Something absolutely damage and failure proof could be made, but the cost would undoubtedly limit the market.

Third: One is none, two is one. And by extension, three is better than two. Redundancy may be undesirable in conversations and essay’s, but not in weaponry or safety systems.

The topic of this discussion is the laser. And more completely, its role and application today as an ancillary accessory to the red dot equipped pistol. It is interesting to note that many in the gun community foolishly polarize themselves into the “either – or” camps. But in reality, we will see that like the Reese’s commercial, they are two great things that work great together.

Both systems will offer an easier method to verify alignment and index on target than traditional iron sights for close range proactive precision shots, or for long range shots. Regardless of manufacturer or devotee’s claims, neither one is faster nor a replacement for close range physical alignment dynamic shooting, or point shooting.

We have already established the superiority of the red dot sight concept on pistols, and have written, taught, and demonstrated this over and again since 2010. In my opinion, although some still wish to disagree, that horse is dead and its skeleton bleached white by years of exposure to the elements. What I want to do is discuss the modern laser, as well as its role and application in conjunction with other sighting systems.

Laser units are easy to add to the pistol. Not all lasers are good equipment as there are plenty of poorly designed, fragile, novelty lasers sold at discount prices. Like anything else, quality costs. Anything from Surefire, Streamlight or Crimson Trace are worth examining depending on your application.

What about a light? My position, based on over a half dozen urban gunfights in darkened environments is that it depends on application. For police duty use, or SWAT applications, yes...without a doubt. Those are proactive - "I am going to the fight on purpose" applications. But for UC/OD/CCW work (under-cover, off-duty, concealed-carry), I prefer to not have a weapon mounted light. A separate hand held light will be far more useful in the second application than a weapon mounted light. I am certain the Lumen-Mongers will attack me shortly but that is my position on the matter. More on that soon.

While the Surefire X400 is extremely robust and likely the top choice for a street patrol, or a home defense pistol, it is extremely bulky for any concealed carry use. Same for the Streamlight systems. And that is an important distinction between a police duty weapon, carried openly, and a concealed carry weapon intended to be hidden under clothing. The latter application must be carryable. And for me and my students that means appendix IWB carry. While I have seen many holsters designed to Appendix Inside Waistband carry of a Glock with a Surefire Weaponlight attached, I can't imagine the Somali-pirate body type that could get away with such a thing. I am 5'10", and tip the scales at 185 with a 32 inch waist and consider myself very fit. I could not carry a Surefire-equipped pistol in Appendix Carry unless I had a sex change.

Crimson Trace offers a Laserguard system which I like very much. The LG-452 Laserguard is a green laser sight and is designed to fit seamlessly on the trigger guard of most Gen3, Gen4 and Gen5 Full-Size and Compact Glocks. The human eye detects green more than any other color and this is a very bright laser unit. It still subject to the same tactical limits of the red laser, but it extends its usability beyond what a red laser can achieve. What I like particularly is the Master On/Off switch which allows the shooter to completely power down the unit. It is small and can be carried concealed Appendix carry with a purpose designed holster. It is available in a green laser, and has an on-off button which allows the user to proactively disable the laser if he wishes.

Any light or laser attached to a weapon intended for combat use must be operable by the firing hand only while the trigger finger is on the trigger. If it cannot be used that way it is not a good accessory.

The lasers are zeroed like a sight system is zeroed, will project the red dot onto the target itself at the point where a fired round would impact. Some claim an “intimidation factor” though I've never seen it happen with anyone on the street, and do not believe it is wise to rely on it happening. A motivated aggressor/adversary will probably never notice the dot in the first place.

No "sight picture" necessary as the laser can be projected regardless of a muzzle-eye relationship. This last point is an important one and one where the laser comes into its own. When firing from less than conventional or less than optimal positions, where even a red dot cannot be seen easily, the laser dot can be projected onto the enemy.

They can also be used in conjunction with night vision units to fire accurately in complete darkness. That may or may not be useful to you.

The projection of the dot on the target is not without a cost. The laser may potentially give away your intentions under certain circumstances.

The Laser can be used at close to moderate ranges but is unusable at extended distances due to inability to see the smaller distant laser dot on a distant target. We tried this with varying light conditions and some lasers do better than others, but none will do better than the red dot optic. Suffice that the farther away the target is and the brighter the lighting is, the less effective the laser becomes.

Try it…put a target at 50 yards and see what the laser dot looks like on it, as opposed to the dot on a RDS sight. The laser dot does not change size, thus a dot that is approximately 0.5" diameter at 50 feet (as advertised) will appear to be .25 at 100 feet, and much smaller as the distance grows. A smaller dot is more difficult to see. The dot on the RDS remains constant size from 10 feet to 1000 feet. Many laser advocates suggest this is a top choice for close range encounters. I tend to disagree as at close range, in a dynamic reactive problem, a man can “point shoot” a completely sightless pistol faster than if he was using either iron sights, an RMR, or a laser.

Batteries are not any more a concern than at any other time. Battery technology has never been better and by changing batteries on lights, lasers and red dots every year, you will always be fully charged.

While the RMR is always on, lasers need to be activated to function. This is where the design becomes a crucial element. A laser that cannot be operated by grip pressure of the firing hand is a poor choice.

When zeroing the laser, I suggest zeroing parallel to the bore. The round from the laser will always impact slightly lower due to the height of the bore over the laser.

I also suggest that the best choice will be a green laser as it will not confuse with the red dot of the RMR. This gives three sighting systems that work independently of one another. The primary system is the RMR, usable under most normal conditions. It is instantly backed up when necessary by the iron sights, installed in their traditional locations on the slide, zeroed to establish cowitnessing. The tertiary sighting system is the laser, which can be left on or off, and which augments the RMR in situations where the shooter cannot bring the weapon up to the eye, or the eye down to the weapon.

If you don't see the video above, click here to watch Lasers on Pistols - Part 1.