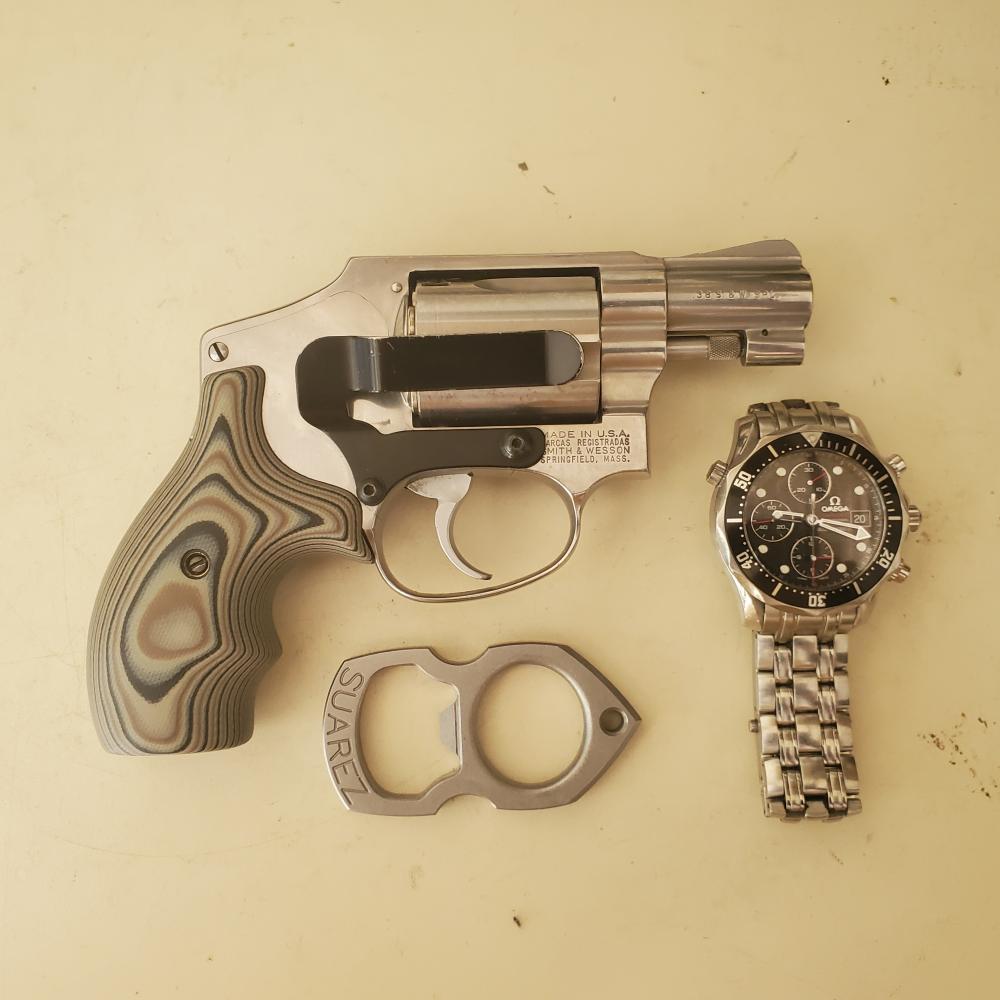 APPLICATIONS OF THE SMALL REVOLVER - PART 1

WHY THE SMALL REVOLVER OVER A SMALL SEMI AUTO?

The primary reason is that the small revolver (such as a J-Frame) or small semi auto (such as the Glock 43 or Sig 365) are not first line weapons. They are carried when other options are proscribed by the social rules of the venue. And specially so in non-permissive-environments (NPE) like Mexico, New York, or California.

In an NPE, your tactics change. You take care of "me and mine", and the safety of the public at large is not an issue. In free America, a responsible man would intervene in a crime that shocks the soul of humanity...but in an NPE where the price for that involvement is exceedingly high, the normal SOP is over ridden by a "break contact and continue mission" protocol. Yes...we will feel bad for the victims we didn't save but not knowing for certain how our intervention would be seen (like we would expect in AZ, TX, FL, etc.), we must change tactics.

In CA even LE are prevented from carrying weapons in many venues. In my opinion, any semi auto should be holstered. DA only pistols like the SIG 290 for example, are in a class by themselves owing to the trigger mechanism...but given that one moment the weapon might be in a sock...inside your shoe...in your underwear right by your balls...or in the traditional holsterless appendix carry (aka Colombian Carry), the J Frame wins.

Why is simple. In my casual testing at home, a loosely carried semi auto will experience magazine button pressure at some point, giving you an unexpected detached magazine...ie., a one shot weapon. I saw this in the wife's purse as well as in the various clandestine carry methods sometimes required with situational carry (a nice way of saying extra-legal situations).

The J-frame exhibited none of those things and was always ready to go. The cylinder release requires a particular movement to operate that was never replicated in these modes of carry. If I were designing a true concealment small pistol, I would eschew the American magazine release and give it the European release to avoid these issues.

Additional points. In an NPE environment, one often waits until the last possible moment to engage as there is very little overt proactive thinking. That means that in your face bad breath combat is likely...even if not desired. Sucker punching someone with a J-frame, coupled with a trigger press is simply not possible with anything other than a revolver. Finally is the issue of forensics. I am not suggesting absconding after an event as such action is highly unlikely in the USA...but in some situations...say in Latin America for example,it may be a consideration for some.

Legend has it that some OCONUS types use very worn barrels in their J Frames - virtually no rifling - well used brass from the shooting range, and frangible bullets...for similar operational reasons.

Next is carry-ability...this has to do with how the weight of the piece is distributed along its mass. Very individual but a G19 is more easily carried than a 26 for example. Most small semi auto pistols seems to have greater mass and slightly heavier than the 642. And even the Seecamp which was marginally lighter than the 642 was not as easy to carry in the way I am suggesting. Something about the size and mass of the Airweight that makes it easy to move around in the manner that I discussed.I suppose mass distribution is a thing.

Finally the issue of capacity comes up. Some small semi auto pistols hold an extra round or two. Okie dokie...so what. These events...the type the J frame was intended for...why we are looking at it...are not detailed by volume of fire nor speed loads. They are characterized by the need for the weapon to be there in the first place, by close range ambush shooting, and by high intensity and short duration fights.

Long response I suppose but this has been on my mind for a while. Identify the fight's dynamics, location and develop tactics to prevail...then choose the weapons to make that happen.