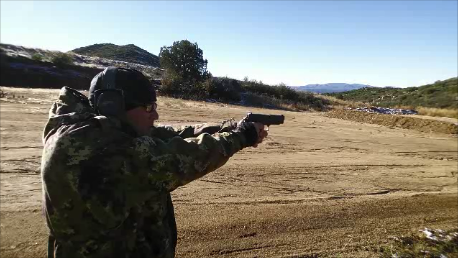 Continuing with the discussions on marksmanship, an important pair of aspects are the issues of breathing and coordinating it with trigger press. One is strictly skill related, the other is skill and gear related.

Breathing is a muscular action, whether voluntary or involuntary. The muscular action of breathing, or of holding the breath creates movement, which is the bane of a stable shooting platform. Not an issue in run-and-gun CQB, but a crucial consideration for accurate shooting anytime that a crucial shot is needed.

In sniper school we teach the natural respiratory pause. And we find that method works admirably when shooting a pistol as well. We breathe normally...maybe taking a deep breath or two, and then allowing the air to expel naturally from the lungs without forcing it. At the point that the lungs feel "empty", you will have between 6 to 10 seconds of oxygenated blood flowing before the breathing must resume. Its during that period of time where, maintaining the visual focus on the sights or red dot, you begin pressing the trigger.

Trigger work begins with trigger characteristics. Some triggers are horrible. Take the vomitable Glock Chicago trigger...or its equally festerous cousin, the New York trigger. I suppose one could get used to anything, but unless you are ordered to carry such a thing, one must ask why? Sadly, soldiers or police officers that are issued such a weapon can do little to improve it. But the civilian that complains about his trigger has a great many options.

I find it amazing that those with poor triggers on their pistols fail to simply fix them. The simple answer is to have a proper trigger added to your pistol. Like most things in life, some will agree and others will bemoan the system in question. With a proper trigger in place, not excessively light or heavy, but smooth and crisp, and using the first joint or pad of the trigger finger, having established a solid shooting position and respiratory pause, we continue.

Begin pressure on the trigger smoothly and evenly, taking it through the "take up" or pre-travel, to what is commonly called "the wall". Yes, we are staging the trigger and taking it right to the edge of the wall as we bring the pistol to bear. This first part should be simple but what most people do is all the preceding and then pull hard on the trigger as if to "get it over with". The result usually is a missed shot.

Instead, press smoothly and evenly to the wall without rushing, solidify all sight alignment and picture as well as breathing, and then continue pressing smoothly and evenly. At some point the pressure will suffice and the shot will break. When that happens, your job is to keep everything as it was prior to the shot breaking. That is...staying in position, keeping the grip perfect, and the eyes looking for the sights or dot during recoil. Do not allow the shot to disintegrate your shooting platform or focus. That last is called "follow through" and is a part of trigger control and much as the breathing.

Learn to do these things and you will amaze yourself at just how accurate your rifle can be. Ignore these things, and no matter how many rounds you send downrange, you will never understand marksmanship with the pistol.