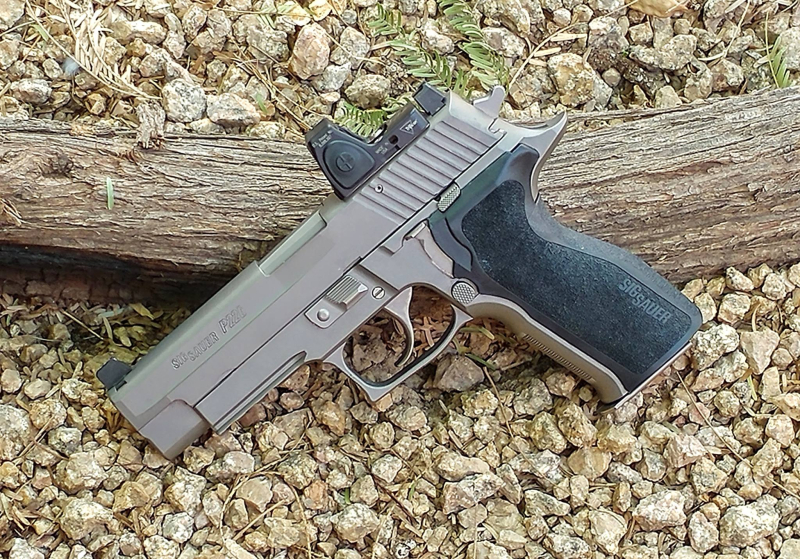 I have a spot in my heart for the SIG P226. It was my first semi-auto duty pistol back in 1988. Coming from the world of revolvers, the SIG was like having stolen alien technology from the future in your holster. As a point of comparison, prior to the SIG, I went into battle every night with a revolver and three extra speed loaders (a whopping 24 rounds in total). With the SIG I had (with a third magazine on my belt) 61 rounds at my disposal. Additionally, while I shot Distinguished Expert (297-300) in the LASD quarterly qualification with the revolver, it took hard work. I did it easily with the P226 and the 4-pound single action trigger (there was no policy preventing single action usage).

Some history. In 1975, SIG entered into an agreement with German gun manufacturer J.P. Sauer & Sohn to develop and market a new handgun which became the P220. The P220 was the first SIG Sauer handgun sold in the USA. It was marketed initially by Browning as the Browning BDA. The SIG Sauer P220 is a refinement of the Petter-Browning design used in the SIG P210. This eventually morphed into the P226.

The P226 was designed for entry into the XM9 Service Pistol Trials held by the US Army in 1984 on behalf of the US armed forces to find a replacement for the 1911. Only the Beretta 92SBF and the SIG P226 satisfactorily completed the trials. According to historical records, Beretta was awarded the M9 contract due to a lower total package price. The Navy SEALs, however, later chose to adopt the P226 as the P226 MK25 with special corrosion protection.

While the striker fired revolution is in full force, it seems the DA pistols are making a bit of a comeback. I know of some special operations people that have selected them rather than the ubiquitous Glock 19. Specifically, for the ability to carry without a holster, the inherent safety of a longer trigger for emergency first shots at close range, and for the extremely light and hyper accurate subsequent single action shots.

Double action pistols like the SIG P226 are not better nor worse than a striker fired platform like a Glock 19. They are different and offer different advantages…and create different training issues. Here are some points to consider with the SIG P226.

Here are some pointers for the system:

Two is the addition of the Short Reset Trigger Kit. This will create an extremely short trigger reset and I believe this is an essential addition. Depending on the length of your fingers, the addition of a short reach trigger may be a good addition as well. All of my own SIG P226s are equipped with SRT kits and short triggers. As well, to reduce girth, the E2 grip system is of great benefit.

Finally, I reduce the size of both the slide release and the decocking lever. SIG sends them all out with oversized levers, which many think is great. I find they get in the way and impede speedy use. The oversized decocking lever sometimes will get engaged by grip and cause the hammer to drop from single action to double action in a string of fire. Not a big deal, but easily remedied.

In conclusion, I like the SIG P226 and it is my personal choice for the best DA-SA pistol.

View Sig pistols and parts at the store here.