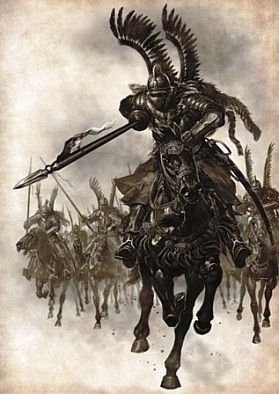 This month we are proclaiming September as Crusader History Month. And in this piece we want to feature Jan Sobieski and his Hussars, and their role in breaking the siege of Vienna.

Very few Americans study any history at all. It is as if they think that the only history of any importance is their own short history. But that is a shame because much of what we are seeing today was born hundreds of years ago, and the motivations of the players back then very much motivate the players today...even if the politicians fail to see it.

Islam has been attempting to overthrow the western world since the 7th century. Nothing has changed. They want the entire world under their thumb. Their world is the world which is submissive to Islam. Anything outside their world is the world of the Infidel...that is us. It is nothing new. One may even say it is "history".

This month of course, marks the anniversary of September the 11th, 2001. I think we could say without doubt that this date has had the greatest profound effect on the western world since Pearl Harbor. But by 1956, nobody was worried about Nazis anymore, and the Japanese military machine had been ground into dust. Back in those days nobody worried world opinion, or the feelings of their enemies, as acres of urban Europe were bombed into rubble. Yes...those places still frown at Americans. It seems we had no reluctance to push around those we had defeated and force them to do our bidding.

So shift now...to 2016...fifteen years after the modern Pearl Harbor.

Same? Or not same? Oh sure, we hear of the spread of democracy and of nation building and people voting. What we don't hear about is how there is no more terrorism, no more beheadings, no more...oh, never mind.

Anyway...the dates of the attack on the Twin Towers...or the "What Difference Does It make" Benghazi fiasco are no more coincidental than parades on July 4th. The Islamic terrorist as a culture, has a long memory. It was in 1683, on September 11th, that the Polish Warrior King Jan Sobieski defeated the Moors (that was what they called them in those days in addition to a few other things I imagine) at the gates of Vienna.

The fight had gone on for many months. By September, the city was in desperate conditions, and its fall was imminent. When the dead bodies stacked up on the corner start to look apetizing, you know you are in dire situations. The 150 year goal of the Al Queda of the day, Ottoman Sultans, to seize Vienna and use it as a spring-board for Muslim expansion deep into Europe was almost within their grasp. Let me restate that...the Islamic Terrorists of the day wanted to take over Europe.

In early September, a relief force was coming to the city’s aid. This coalition force consisted of 47,000 troops from Austrian and Holy Roman Empire (Germans) led by Charles Duke of Lorraine; and a Polish army some 37,000 strong, led by King Jan Sobieski. Most notable were Sobieski's "direct action" team - some 3,000 Hussars.

The Islamic army attacked the relief force, resulting in 12 hours of intense infantry combat before Sobieski saw that the time was right to mount an all-or-nothing counter attack. The moment of decision was at hand. Sobieski led a desperate charge of 20,000 Polish and German cavalry, the largest cavalry charge in history, with Sobieski himself and 3000 hussars at the head of the charge.

The Muslim lines crumbled, and the hussars pressed into the Muslim camps killing everything in sight. The Islamic army retreated and abandoned their attempts to conquer Europe...for the next few hundred years. Sobieski, ever the warrior poet, declared as he stood on the battlefield,

I came, I saw, God conquered.

As we commemorate the date, and recall the heroes that died...and the victims...and the ridiculous and craven western leadership - let us also recall men like Sobieski, and the end game of our enemies - and take his example to heart. Some people and some cultures, we will never be able to live in peace with. That is a sad fact, but a fact illustrated not only by history, but by the events which history gave rise to today.