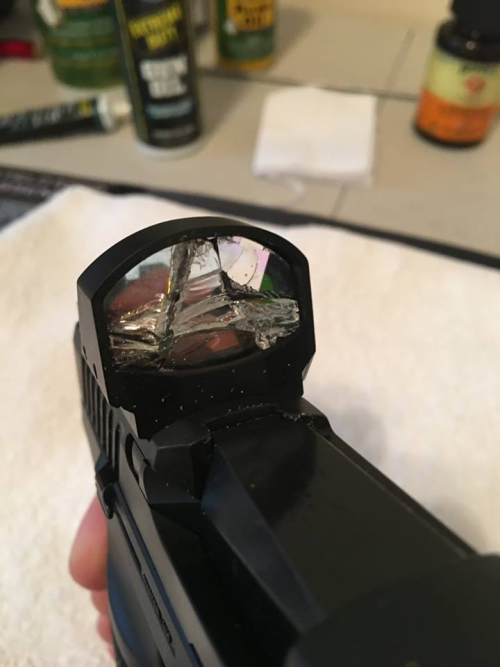 When Suarez International began the study of the Red Dot Pistol in 2009 I had no idea that it would become such a popular and mainstream idea. And yet today, almost a decade later, we are seeing more pistols with red dots than pistols without them. I predict that it will be a rare thing to see a pistol in a combatant’s holster that does not have a red dot as a sighting system.

However what invariably happens is a desire to shortcut the system, and to get the benefits on the cheap. With that we see the proliferation of low quality red dot sights mounted on pistols. And by “low quality” I mean sights whose greatest attribute is that they are cheap. But “cheap” never brings quality.

Now I understand very well that not everybody can drop $500 on an optic but an optic on a handgun that will be carried 24-7 in a holster is vastly different than an optic on a rifle that will sit in the safe until the weekend. Weapons meant for fighting (or “self-defense” if you need to be careful with your thoughts) require certain attributes. Professionals, or those following similar standards, cannot afford an optic to fail.

Look if you are a sportsman or a hobbyist and you never intend to carry that Red Dot Pistol concealed, in a holster, in the real world, in anticipation of a gunfight, then read no further because I have nothing of value to offer you. On the other hand if you carry your Red Dot Pistol daily, then you like the professional, cannot accept failure of any kind.

Your installation of the chosen red dot on your pistol will follow a certain pattern. And the red dot that you choose must have certain attributes. And there is a price for those attributes. As of December 2016, the optics that I would suggest as “suitable for a carry handgun” are as follows.

I get inquiries about other red dot sights and I advise the customer that we won’t work with them for the simple reason that they will not work well on a combat handgun and I will not put our name to an installation involving them. Here is the short and sweet on red dot sights. Some of them are pure crap, and will not withstand any sort of daily concealed carry or duty use.

Things that would disqualify a red dot sight for combat handgun usage.

1). Cheap. Look…everything has a price and a cost. There is no bargain eye surgery, or cheap college education. We know the cost of manufacturing a great and robust red dot sight. And if we see a sight being sold for extremely lower price points than the top units on the market, rest assured that somebody cut corners in manufacturing, components, or assembly. A $200 Burris Fastfire may be really popular becuase it is cheap and has a great warranty, but trust me…there is a reason why it is only $200.

2). External, and easily activated, “on-off” buttons placed where they will be activated by holster use. The Leupold DP Pro and the Vortex razor have the buttons inside the red dot unit itself. The Trijicon RM06 and RM07 have them set up so that they must activated in unison and with a heavy direct pressure that is unlikely in holster use.

The Fastfire (again) and the SIG Romeo are unsuitable for serious handgun use for that very reason. yes...I know SIG will tell you all day long and twice on Sunday how tough their Romeo red dots are...but they are not. We get a large number of SIG RX owners wanting to convert their slides to RMRs for a reason.

3). Waterproof, Impact Proof, and Ruggedness. If an optic is not waterproof, I would disqualify it from any sort of serious usage. The Shield is a grey area as it is the only smaller sized red dot that I would consider for use on Glock 43s...but not on a full use duty weapon. If it breaks easily, or stops working due to an inadvertent impact, I would disqualify it from use.

4). Ability to install with Back Up Cowitness Sights. I am astounded that some people still want to argue the point about this. The taller the Red Dot sits, the taller the cowitness sights that will be necessary. That has been the main complaint with buyers of the Glock MOS system. The cowitness sights need to be so tall that holster selection becomes a potential problem as well as lateral pressure on the front sight possibly damaging it.

Some optics do not lend themselves to use with properly installed cowitness sights. The Insights MRDS for example has an “On-Off” button that would interfere with those sights, as well as being quite tall in its design.

If you are considering advancing your skillsets and equipment to the Red Dot Pistol, take considerable time to research your choices. The bargain of the century may not be what you think, nor work as well as advertised. There is a price for quality, and there are no shortcuts to it. As the old TV ad noted, “You can pay now…or you can pay twice as much later”.