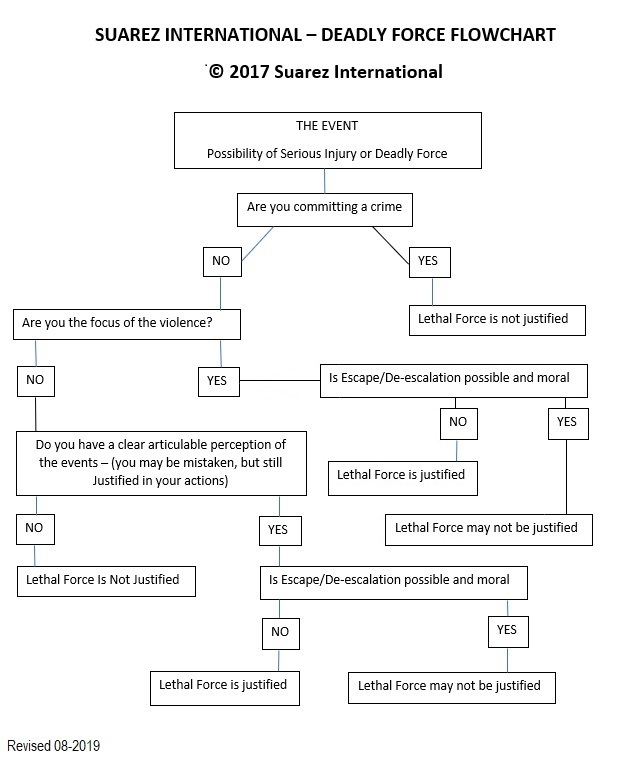 AN UPDATE TO THE DEADLY FORCE FLOW CHART

We were reviewing this incident, found on the blog Police-One. We were discussing whether the event was justified or not. My perspective was that it was not and that I probably would have handled it differently.

The officers had in essence contained the crazy guy. He wasn't going anywhere. And most important, he was not in a position to hurt anyone
else.

At the point that the suspect began moving toward the officers, they were the focus of the violence...BUT...its not the same for them as for you, the private citizen. Here is why.

It was not one lone officer (or CCW guy), there were a number of officers present. Moreover, once the less than lethal was in play, Tasers and Bean bag guns, preclusion is gone until those assets have been expended unsuccessfully. Then we have a situation where the officers cannot allow the man to leave, nor can they allow him to injure them. They attempted less lethal options but they failed, leaving no other option but to shoot. In this case, the less lethal option had not even been attempted before deadly was applied.

Lacking the additional officers and lacking less lethal options, it is a justified shoot immediately.

Based on those discussions (which can be read here) we added an additional bubble - "IS ESCAPE/DEESCALATION POSSIBLE AND MORAL" in the flowchart.