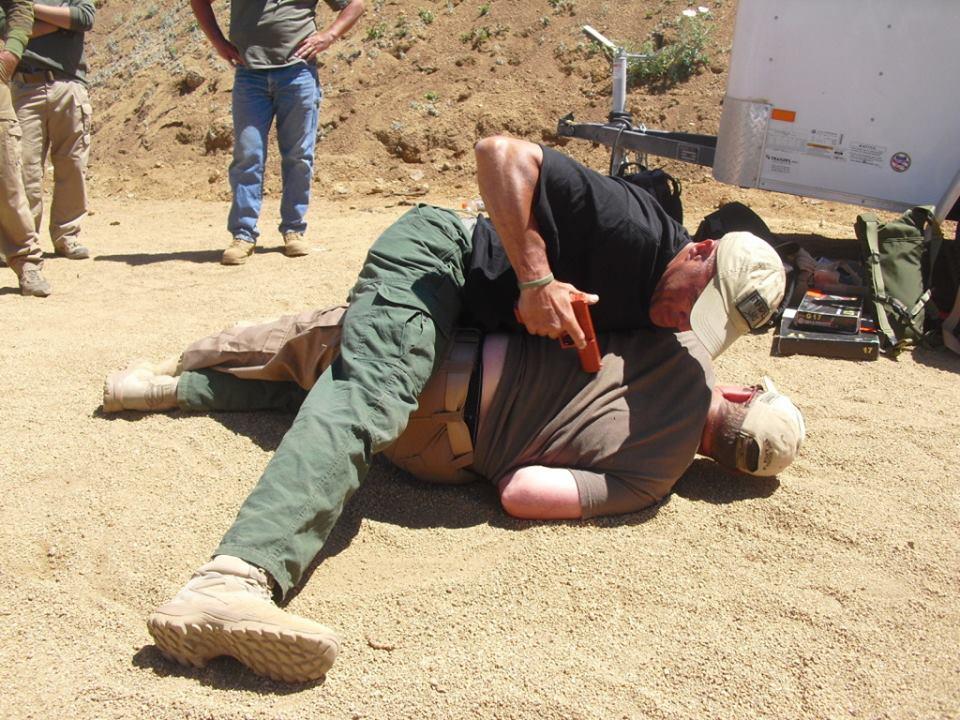 GROUND FIGHTING - WHY YOU NEED TO KNOW HOW

I got back to the station and my uniform was in shreds. My knees and elbows looked like I was some little kid that fell off his bike. In short, I looked like crap. I had just concluded a nice little ground fight with an MS-13 gang member. In retrospect, I should have simply stabbed him in the neck...but we learn and live…thankfully. He was brought in beaten up bad, and choked out...but very much alive.

In my experience, fights do not always go to the ground. They do if you lose your balance, or if you go to a clinch and both guys lose their balance (or one decides to take it there). If you are able to preempt the clinch, or end the affair quickly, there won't be any ground involved. The big problem with being on the ground is that you will never be fighting just one guy. There will be others waiting to kick you in the face when you are tied up with their "carnal"...their homie.

So my focus on learning to fight on the ground is not to apply arm bars, or submit people, but rather to get the f*ck back up on your feet as quickly as possible.

If you have no ground skills, learn some. Jujitsu is probably the best place to start. And if you do have those skills, reconsider the popular sport tactic of staying there. Ground fighting on a mat with ONE guy in the gym is one thing...finding yourself on gravel, or asphalt, tied up with one guy as his friends begin walking toward you for the boot party is quite another. I look at being taken to ground as a deadly force event.

I will add a few things -

1). I thoroughly respect the jujitsu guys...but I also respect Western Boxers, Muay Thai guys, and any real Karate fighters. Yes, they are sports, but I will tell you who I don't have much respect for - the “theory warriors” (in the martial arts world as well as the many in the gun world) that have never tested their skills either in the real world or in full pressure events.

2). I think the best thing I learned in my limited time doing Jujitsu (and I am no expert) is how to maneuver there to get access to your weapons. Like I mentioned, if I find myself on the ground, other than getting back up if possible, my next course of action is to maneuver to pull steel and either shoot the other man off me, or stab him off me. Taking it to that level is easily justified.

3). On clinching: My perspective is that if I clinch with an adversary, it was not my plan on the street, and I am automatically going to guns or to knives as well. I will turtle up and allow all the elbows to land on my hard head and knees on my elbows and shoot or cut his lower body out from under him. This is where sport and street take opposite roads. Clinching often ends up on the ground so I don't want to linger there either. Break contact or go to guns first.

4). Arm bars and submission stuff is great if it works, but I have seen them fail many times back in the patrol days. It was very de rigeur for the police to want to submit people without injury. I found that the hardcore convicts and bandits would not easily submit. They were tough as nails and not impressed with such tactics…and could muscle out of these. Maybe we weren’t doing them right, I don’t know. My best solution was a preemptive strike...with a Maglite right to the frigging head...or something along those lines.

5). Same for chokes. I choked a great deal of people then, but it had the same problems as the clinch. If you didn't set it right it was a clinch with the usual results. And if you did set it right it took several seconds (my best was a choke out in three seconds) to take the bad guy out during which time you were really vulnerable. But chokes are a beautiful thing and a great tool to have. Sometimes you can set them up and apply as a preemption. Other times they are inadvertently presented by the opposition. Learn to recognize the opening and exploit it.

6). Like all things...specialization is for insects. But in hand to hand, what seems to work best for the lone individual on the street is great footwork, devastating strikes (usually works best if you are physically strong and physically fit), and the ability to start before the other guy - sucker punching them into unconsciousness while they are still trying to convince themselves to fight.

7). Oh yes…one more thing. Will you be able to draw and shoot, or pull and cut in the clinch with your current carry method? How about on your back in a guard? Can you get up while holding a pistol and shooting without turning your back? It would be bad if the answer was no. Get away from the shooting range and test your skills in force on force. If you don't like your performance, change something.

Just some things to consider. Stay Dangerous my friends.