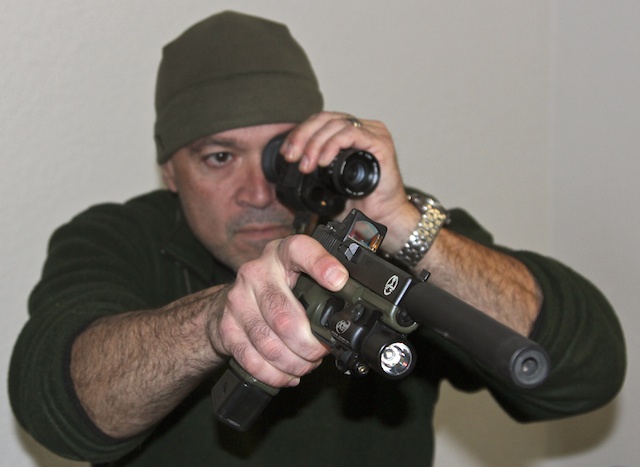 How Technology Owns the Darkness

The method most basic, for using a Night Vision Monocular in conjunction with a handgun goes like this.

Hold the monocular in your support side hand and bring it up to your non-dominant eye. How close will be up to you, but understand that there is a glow given off by the unit and holding too far away will not only illuminate your face but also reduce your visual acuity through the unit. Adjust the optic so you can hold it as close as possible. This will remain in place as you move through the area.

It is suggested that you attach a neck lanyard so that if you needed both hands free you could drop it on the lanyard and instantly be able to operate whatever you needed with the support hand without loss of the unit.

When moving, you can bring the pistol into a compressed ready such as SUL, or a modification of SUL. This allows you to move efficiently without excessive exertion, or projection of the pistol into unknown areas.

The main point to remember is that in total darkness, if you are equipped with night vision, you can see things you normally could not and thus move with an ease that would not be available otherwise.

Although we are assuming that you can see and your adversary cannot - to a certain degree - remember that night vision, like body armor, is quite common and the opposition may also be equipped with it.

As well, other target indicators such as sound, smell, shine, etc., remain a concern so be quiet and stealthy. The idea here is to start and finish the gunfight without the other guy knowing you are even on the same planet as him.

When the need to engage is presented, bring the pistol up in the usual one-handed shooting position. Notice that my Glock is canted slightly in what we jokingly refer to as a "half homie". This is actually a bullseye shooting position known as the McMillan Tilt, invented by Marine Olympic pistol champion Bill McMillan. I won't go into the benefits of this here, but try it for yourself. If it works use it. It works well for me.

Now to the matter of the eyes. Keep them both open of course. If the target is within three yards, just point shoot him. If you need more precision such as if taking a small part of the target, such as a head shot, you will need to refine what you see. Here is how we refine.

If using tritium sights, pick up the dots with the shooting eye and keep scanning the target with the non shooting eye. The two images will come together via the binocular capability of the eyes. It will need to be learned and developed, but is quite fast into use.

Using the RMR is even easier, and the dot appears as a bright green dot centered on the threat using the same methods.

Finally is the use of the laser. For proactive low light work, ideally you would have an IR laser mounted on the pistol, so that you could refine alignment without any notice given to the opposition. I have a Surefire X400 mounted on my home defense Glock. The reason is that there is often a need for a white light in these scenarios - at some point - and currently there are no factory produced white light units with IR lasers. A visible laser can be used if you train to use it only at the point of contact.

Unless you will be using a head mounted NVD, you have one hand to hold up the NVD and the other for the pistol. With the visible laser, simply align everything and only activate the laser the instant before firing so you do not compromise your position with it.

More studies on the practical combative application of night vision technology for the individual coming soon.

Tags:[Lights][Optics]
Next Newest
Next Oldest