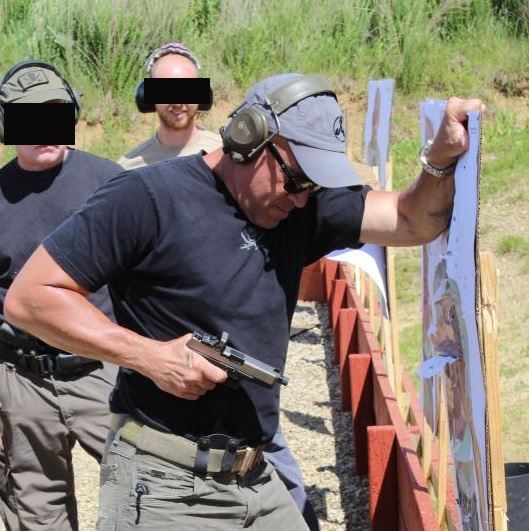 ITS ABOUT THE KILLING!!

"Its not about the score, its about the killing".

I had just shot a drill with a CZ 75 - a handgun I was unfamiliar with. It was a movement drill very dynamic in nature. Watching were Slovak Military, Czech Military, a handful of Russian "Businessmen", and a couple of others I was asked to "forget", and whom I have. Training was surreal...on an abandoned Soviet base in the hills above an eastern European city.

As soon as I spoke it, and heard it translated into Slavic, I realized the weight of those words. "Its not about the score on a paper target...it is about killing another human being with whom you have a difference of opinion". The nods of approval and acknowledgement in this group of killers was indicative of two things...one they agreed, and two, I would be drinking with them that night...perhaps too much. But that is what combat is about. That is what gunfighting is about. Killing.

And what I do is teach men to kill other men who disagree with them. It could be as simple as, they want your daughter and you don't wish to loan her out for an hour...or they wish to take your car, or watch, or wallet, and you would rather keep those. Or it could be as complicated as geo-political events. But at the end of the day...it is the solitary man with the rifle, or the pistol that decides yes or no. And that is my world.

The skills we teach are simple. We divide into proactive and reactive. Proactive means you have the initiative. You decide when you launch and then take the fight to the enemy. Marksmanship and the will to kill are paramount here. Reactive means reacting to the ambush, and just like many special units, we teach to counter-attack the ambush...not by standing still, but rather by moving and returning fire. I have done both and so have my students spanning twenty some years of traveling this path.

And once we set aside the skills issue, which is very important, but professionals already possess it, we get into the discussion of equipment. So here are the things that help you to kill better.

Optic Sights - History cannot be rewritten. Suarez International was the first company to mill slides with sights in their traditional positions, for red dot sights (now optics since we are working with green dots as well). Todd Jarret did not have what we had...neither did Kelly McCann's Doctor sighted Glock 19. The red dot in conjunction with existing irons is, as they say in the ghetto, "the shit". It moved the art of gunfighting forward by leaps.

Putting it in perspective, when I attended Gunsite for the vaunted 499 in 1991, we went prone to shoot steel poppers at 50 yards. The class was made up of a handful of Gunsite regulars, some cops, and a smattering of SEALs and Green Berets. About half made the 50 yard shots. Today at any given class I have my students draw and hit at 100 yards, from standing positions, in about half the time. Optical sights, red or green help you hit better under all conditions and thus help you kill better.

Improved Triggers - Light triggers are not the "shit". That is what every Elmer Fudd is out looking for. Light with no pre-travel so as soon as they drop it into their sweatpants pocket on the way to Walmart for the Pizza deal, it will blast the top of their penis off. No grasshoppper...CRISP and predictable is what we want, not light. Crisp and predictable allows you to arrive at the "wall", breathe...then press through the rest of the break for clean, crisp, trigger break. We are not the only guys to make a workable trigger, but we do make a workable trigger...one worthy of the gunfight.

Compensators - Nobody ever won a gunfight with more recoil. I recall the early days with Cooper and his focus on the Weaver Stance...all intended to attenuate recoil. But if truth be told, men today...at least combatant men, tend to have more powerful upper bodies. I recall when I was having a drink with Cooper, and one of my road dogs from LAPD, and the discussion turned to recoil control, Cooper mentioned we were very muscular. We may have been compared to men in the 1950s, but certainly I am much more muscular now. The point is that grip will attenuate recoil much more than stances...but the muzzle still needs to move. This is where compensators come in. A properly set up compensator will be short and yet minimize the muzzle bounce from the shots fired. The street comp is like that...firing it has minimal deviation from sights on target, and allows for continual hits on the same threat. And anyone that knows about killing knows how important that is.

The final element that I am studying is the laser system. It is not a replacement for anything. Rather it is an ancillary element to the existing systems. I will be exami9ning Lasermax, Holosun, and of course, Crimson Trace. More to follow in this realm.

Again, its about the Killing

And Suarez International has been making killing easier since 1995