KILLING A CHILD TERRORIST - COULD YOU DO IT? 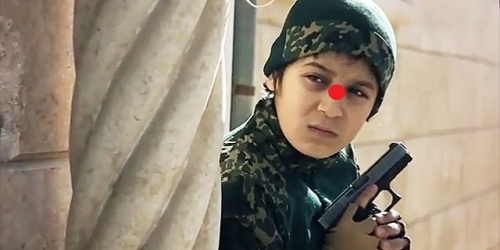 What a horrible thing to say or consider? Yes, for modern western man that is almost inconceivable. But as I have said for over a year, we live in a time of war. And although the Trump Presidency has been the best thing to happen to America since the end of WW2, I would not expect the momentum of the ISIS Jihad against the west to diminish. Moreover, I think that a traditional, "Let's bomb them in Syria" perspective may be fine for Syrian security, but will do nothing to thwart the Orlandos and San Bernardinos that are being planned right now in America by people that share the same philosophy.

Last August I wrote a controversial article titled - Could You Kill A Child Jihadist? You can read it here - COULD YOU SHOOT A CHILD JIHADIST?

In the article I referred to a video that surfaced showing 12 year old boys executing prisoners. That video was bland compared to the one I am going to show you here. At the end of the original article I said the following -

"Our enemy has shown us his use of the very young and the very old as terrorists. Fine, thank you - information received. We live in a time of war and our tactics and engagement concepts will change in accordance with the new information. The little jihadist terrorist active shooter or bomber gets shot right in the face...just like the big ones."

Have a look at this video showing similar aged terrorists carrying out a direct action take down of a building and killing prisoners that had been tied up and placed inside. We live in a time of war...get your minds right about this and who the enemy might be on any given day.