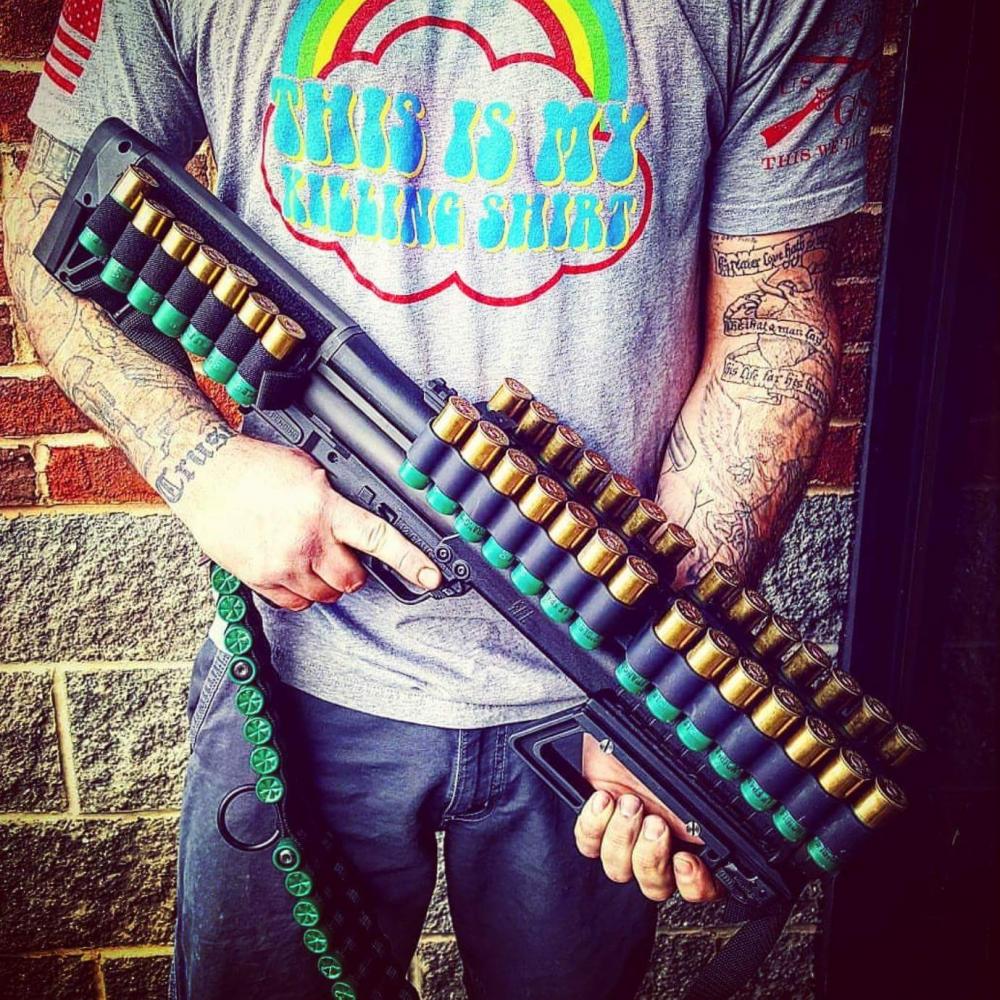 Reloading the Shotgun in a Gunfight

When we turn to the use of the shotgun in a combative, gunfighting application, we have to deal with the same issues. And I understand those issues well as I always felt better with more ammunition. But the issue we see with the shotgun which we do not see with other weapon platforms is the desire to keep that ammunition on the weapon itself. I don't dislike the idea of having some ammunition on the shotgun, but not if it compromises its handiness and utility.

A shotgun is not a high volume of fire weapon. It is not intended to take part in an infantry maneuver under fire, nor to compete with a drum-fed SAW. The shotgun finds its utility in the same distance intervals the pistol does. It is a close and fast deployment weapon, and each press of the trigger has potentially the same effect as half a magazine of pistol ammo fired en mass. Think about this for a moment. Eight rounds of pistol ammo has about the same effect on a human torso as one round of fighting buckshot. The greatest amount of damage in the shortest time frame is what the shotgun does best. The shotgun's ammunition allows for a very high speed deployment on targets, partial targets, and at times when a weapon that fires a single projectile, such as a pistol or a rifle, would not allow the user to get hits in the time frames presented.

In short, shotguns are faster, and create greater tissue destruction than pistols or rifles. Doing anything to reduce those advantages is ill-advised. One of those mistakes is making the weapon overweight by adding excessive ammunition onto the weapon itself. For reference, the highest round count I ever fired in a gunfight. when armed with a shotgun, was a whopping three rounds. I am aware of one man who fired six before the event was concluded. So it is not a matter of ammunition capacity, but of deployment speed.

A heavy weapon is slower than a light weapon. We don't add a couple of MOLLE shingles to teh stocks of our M4s do we? Of course not as that would unbalance the rifles and make then heavier than optimal. Keep your shotguns on the lighter side.

That is not to say we do not want extra ammunition on hand, but it is a simple matter to select a carry method that keeps the light and fast doctrine in mind. For the professional proactive use, or even the "grab and go" scenario in the middle of the night, having a small bag slung over the muzzle of the weapon is very easy to set up. When the shotgun is grabbed, the bag is right there, ready to be slipped over the shoulder. And while some might laugh at the idea, a bandoleer of buck shot can be slung over the shoulder as well and be quite fast, not to mention voluminous, in the supply of ammo.

As well, the present system of loading during the fight is time proven, battle proven and serves better than any other system, including the magazine fed concept most recently reintroduced by Remington and Mossberg. That system is to load single rounds into the tube at every opportunity during the fight. The old school, "Shoot One Load One". And that done with the muzzle pointed toward the danger area and the eyes downrange (not on the enlarged loading port).

I am glad the shotgun is making a come back. It is a great and devastating weapon that has always been the top choice when something needs to be totally destroyed immediately.