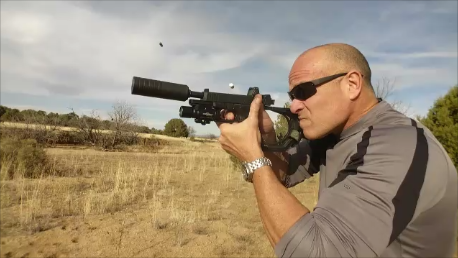 Warriortalk is where we throw ideas around and many of those ideas come to fruition as actual training methods and weapons. Yes, I am a capitalist and I create and develop ideas for profit. But only reasonable ideas turn into products, or classes. There are a great deal of things that we simply never follow up on because there is no actual application. So we were discussing the weapon, and the exact term - "Pistol Caliber Carbine" widely in early 2009.

We actually began using the term at warriortalk as early as late 2008. Everyone copies everyone in every industry. Historically interesting as now, even the competition crowd is using the term and created an entire category of gun game around the weapon. And recently the gun media have been debating and cogitating the utility of the weapon.

First we must understand that our perspective here is gunfighting. I have no interest in gun sports so that aspect of application is never present in my mind when I am working on a project weapon or weapon concept. It is not about scores, it is about killing. And as foreign a concept as that may seem to the gun hobbyist, that is the reason why firearms exist in the first place. Next we must understand that firearms are tools...just like the hammer, the wrench and the screwdriver in the tool box. No single tool does everything well. But the guys that only have a hammer, or a screw driver, will always want to force the single tool to do things it was not intended for.

The old analogy of "if all you have is a hammer, every problem will be seen as a nail". The hammer being today's love affair with the prolific rifle. But the wise gunfighter looks at the problem first, then selects the best tool for the job. The modern American gun guy does it the other way around. To select the correct tool, the craftsman must understand the problem before he selects the tool.

The Problem: The need to address an adversary, or adversaries, at close range (inside the confines of a house, business, or commercial building, or outdoors within 50 yards). The adversaries today are likely to be armored, or wearing explosive devices. The need for surgical precision is high, with a concern for minimizing potential collateral damage from errant rounds (that means "misses"...in case those commenters I was referring to are reading this). The armor of yesteryear was easily penetrated by rifle rounds such as America's darling, the 5.56x45.

The armor of today however is a horse of a different color. The availability of hard plate armor has become an effective countermeasure to the notion that a rifle will defeat it. That "defeat the armor" idea was what caused LAPD to become the driving force behind Law Enforcement's move to the rifle. But that was for the armor of nearly a quarter century ago. As well today we have the reality of the jihadist with the bomb vest. And shooting a bomb vest with a 5.56x45 will in fact detonate it...at least with the low quality explosives we have seen here in the USA.

So the solution to the armor/bomb vest is not to defeat it, but to bypass it. And for quite a while now we have been strong advocates of the face shot being the primary target. And that tactic has been proven in the field now repeatedly. A 5.56x45 is listed as having an effective range in excess of 300 yards. A missed round could travel much farther. A 9mm on the other hand will travel less and in my experience penetrate fewer intermediate obstacles. This of course can be mitigated with ammunition choices but in general, 9mm will travel shorter distances and penetrate less than a rifle round. Some see that as a liability, but if the problem is understood, it is hardly that and a great asset.Additionally, all rifles, including SBRs are large. They have a certain length and a certain height and width. That cannot be compromised. Even an 8" barreled SBR with one of the LAW folders is still a large package in dimension and in weight. A weapon specific to this problem would be smaller in profile. Shorter, thinner, not as wide, and lighter.

The problem discussed is not solved best with pistol, rifle, or shotgun. It is best solved with a hyper-accurate submachinegun.

The Solution: So when we look at the problem at hand, the advantages of the 9mm are evident. It is just as easy to hit a target the size of a face inside 50 yards with a 9mm as with a 5.56x45. Yes, we are assuming the user is loading with dollar-per-shot anti-personnel ammo and not the cheap reloads from the local gun show. Inside a house, office, or other building, the distances will usually (not always) be closer than this. But still well withing the 9mm capability.On the range this will never be a factor, but inside an office building the report from a 5.56x45 compared to that of a 9mm will be noticeable to the extreme. Yes, we can suppress the 5.56, but we can do the same with the 9mm, making it more than 'hearing safe", rather almost truly quiet. But neither of those options are possible without increasing the length of the weapon considerably.How field-accurate a shooter can be is related to how comfortable a weapon is for them. And that is comprised of weight, balance, recoil, sound, etc.

A 9mm with a stock will be lighter, recoil less, and have far less blast than a comparable 5.56. Thus across a room, a face shot right now, is easier with a 9mm than with a 5.56. Another factor is weapon support. Most people on earth carry a Glock 9mm. The pistol in their belt can easily become the "solution weapon" with the addition of a stock (yes...I know..."arm brace"). And the man so equipped does not need other magazines with other ammo. His carry magazines work just fine and the manual of arms is the same.

This is the solution weapon for the problem we defined and it is the weapon that rests by my desk and by my bed. With it I have shot perfect scores on my old MP5 qualification courses (HK International, LASD, LAPD, SAS-based Singleton International). Many CT Teams are revisiting the Submachinegun for their missions for a reason. It was, and has been rediscovered again as, the best tool for the job.