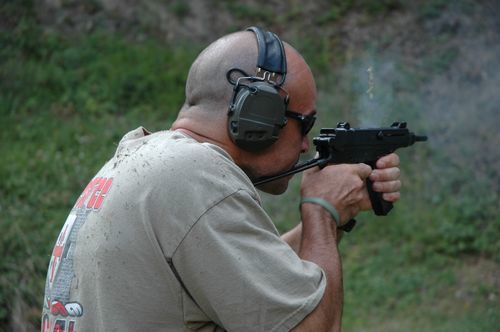 While in Czech Republic some years ago we had an opportunity to play with several Czech weapons from SMGs to full-size Machine guns. Very cool what you can really do at a former "secret soviet base" in a former communist nation that is now free.

The first submachinegun we worked with in Czech Republic was the infamous Skorpion VZ-61 SMG. "Infamous" due to its use by several terrorist groups around the world. Carlos The Jackal was quite fond of it as I recall. This due to its concealability (no bigger than the typical IPSC game gun), and its controlability. Take a close look at the photo. You will see six shots being fired on full automatic. The brass cases are in the air or being extracted. Notice also the total lack of any muzzle rise at all. We were treated to the "song of the Skorpion". The weapons burns though a stick so quickly that one can hear the whistle sound of the brass cases falling back to earth after the last shot is fired.

The VZ-61 is an interesting little weapon and a bit hard to classify - is it a machine pistol (a full-auto handgun) or a submachine gun (a full-auto shoulder fired weapon). Its was first seen in late 1950s and intended to provide various non-infantry units with lightweight PDW that was more effective than a pistol, but is no more difficult to carry.

Another application for the Skorpion was for use by various Special Operations people because the 7.65x17 Browning / .32 ACP can be very easily silenced.

First prototypes were built in 1959, and officially adopted in 1961, as "Samopal Vzor 1961" (submachine gun model of 1961), or SA VZ-61. The weapon was issued to various units in the Czechoslovak army, and also licensed in Yugoslavia.

The Skorpion is a blowback operated weapon and has a rate-reducing mechanism housed in the pistol grip. This produces enough delay to slow down the cyclic rate of fire to a, still chainsaw-like, but controllable, 800-900 rounds per minute.

The VZ-61 we worked with is a 32 ACP caliber weapon that gets sneers of derision by many gun trainers in the USA as a result of our national "big caliber - little *****" syndrome. While it would be more desirable in 9mm, the 32 ACP is nothing to ignore and I doubt any of the people currently calling the weapon "anemic" would care to take a 20 round burst of its ammo in the face.

The VZ-61 is not, and was not, conceived as a general purpose SMG. And it cannot be compared to an UZI or an MP5 for general use. But for the situations where a great deal of volume of fire is needed and concealability essential, such as in certain executive protection details, certain police functions, and yes - in what might be termed as insurgency/counter-insurgency operations, the sting of the Skorpion is a force to be respected.

Like certain other firearms, even those who dislike it, or who would never select it as a primary weapon, should familiarize themselves with it since it is highly prevalent around the world on both sides.

Tags:[Skorpion][Submachinegun][VZ-61]
Next Newest
Next Oldest