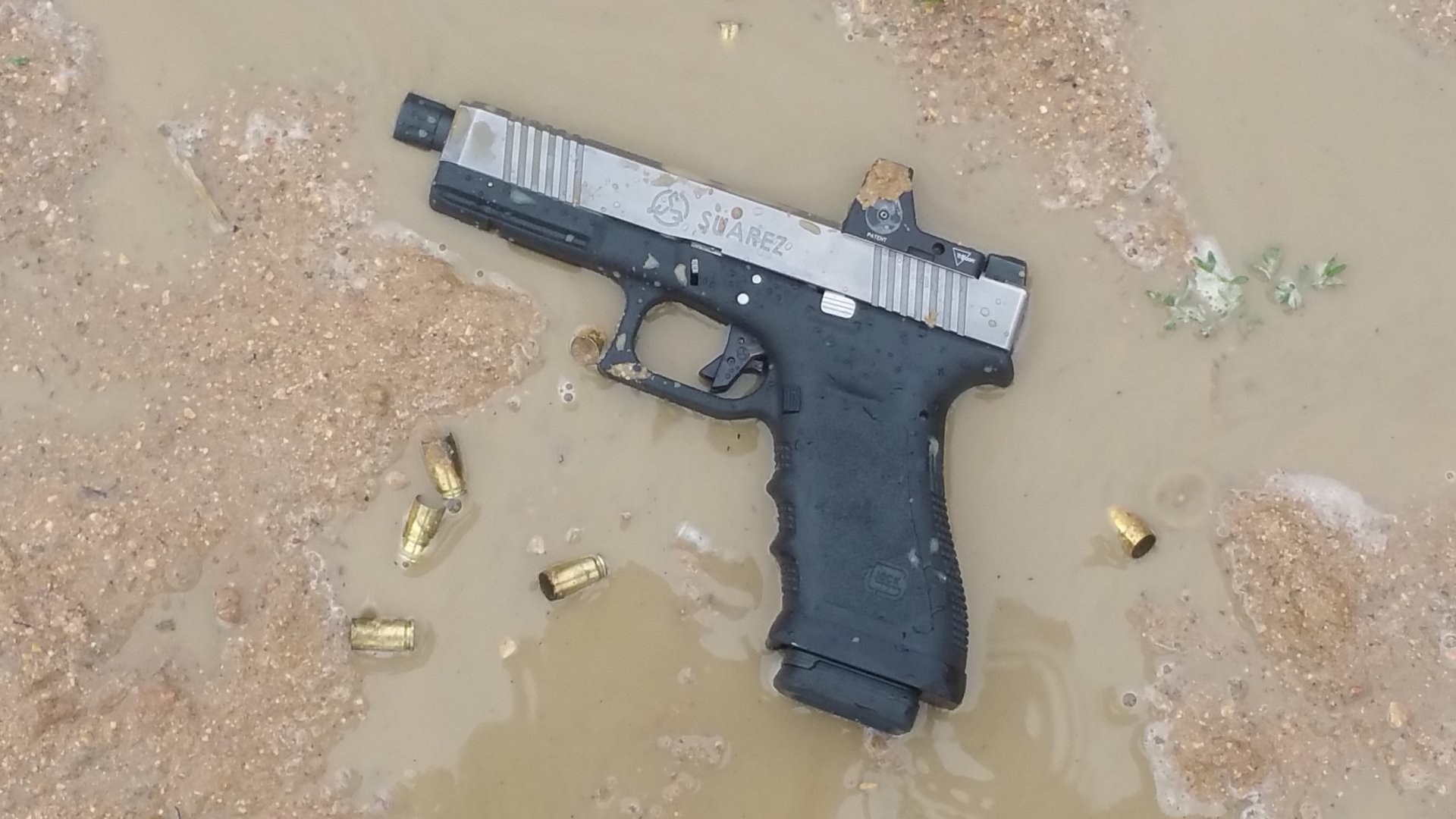 RED DOTS IN THE RAIN

All new technology is resisted at first. Eye glasses, smart phones, computers, inoculations, and you name it. The red dot pistol, or as the competition crowd calls it, "the carry optics pistol", is no different. When we first began milling dovetails for the Trijicon RMR in 2010 there was a great deal of resistance if not abject ridicule. But today we see a plethora of offerings using this concept. The resistance continues however on blogs and social media, parroting the same myth and superstitions about this weapon concept. One of those myths is that the red dot is not usable in the rain.

Recently I was the guest of Rampart Training in Sedalia, Colorado to conduct our flagship course, Red Dot Combat Pistol. We had twenty two students, all accomplished shooters with backgrounds in police, military, concealed carry and competitive shooting sports. We conducted the same course we have conducted for the last few years, but in the middle of the second day, it began to rain.

What a great opportunity to see for certain, what a red dot pistol is capable of in the real environment. The rain was constant and hard enough that a driver would have had his windshield wipers at medium speed, and a man wearing eyeglasses would have needed to wipe them often. Not the blinding sheets of hurricane rain, but more than a mere moist drizzle. Although we did not have this in class, at some point I suspect sufficient volume of rain would prevent any sort of accurate shooting with anything, irons or red dot. To make matters as bad as possible, I took a bottle of water and poured it into the viewer's side of the RMRs, filling the entire cup area with water in the event that the natural rain was insufficient for our drills. As well, pistols were dropped into puddles on the range.

Shooters had been taught visual immediate action drills, selective focus drills and alternative sighting for those events where the dot was malfunctioning, or if the sight was occluded for some reason. Targets were a steel torso sized targets and plate racks at approximately 10 to 25 yards. In the image below we see two SWAT Officers engaging steels with RMR equipped Suarez pistols.

The results? Even with sopping wet pistols and flooded RMR sights, the shooters were hitting the steel targets regularly with very few missed shots. Were they as accurate and was it as easy to hit well as it would have been on a dry and sunny day? No, but the myth that one cannot hit anything in the rain with a red dot pistol was busted hard and openly for all students to witness for themselves. And all that nonsense we hear today about enclosed versus open emitters matter not one bit.

For information on scheduling an Original Red Dot Combat Pistol School at your range or for your unit, contact us at Suarez International.