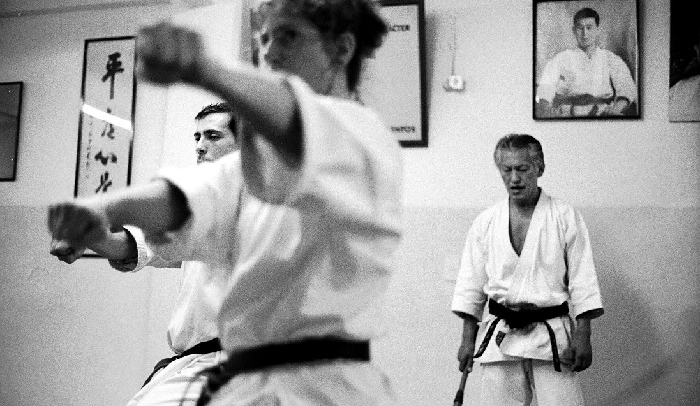 At the Force on Force class we had one resistive student. I rarely get these guys much any more because you have to commit to come up here, beyond the wall, to train with me...its not as easy as having a convenient class down the street on what happens to be your day off. But once in a while... Anyway...his main complaint was that he did not believe a kata was a good thing and sent a tome of an email explaining why. I have found through the years that the more words you need to use to argue a case, the more emotional that case is and the less intellectual it is. The western student...specially gun people have a disdain for rote training. You will hear terms like "adapt to the situation", "build bad habits", "you can't predict the attack", "adversaries are unpredictable".

At that point I simply shrug, and wave "bye" as I no longer need to bend over backwards to convince anyone of the validity of our work. If you agree, come and train...if you don't, don't come and train...it really doesn't matter and the comments of the guys that attended speak far better than any marketing could. But lets look at an analogy that you will all understand...language. Instead of a "fight application" lets look at a conversation, or a debate.

You need to adapt to the situation? Yes you do. Unless you can read the adversary's mind, you don't know exactly what his argument will be. But you can predict certain lines of approach and his talking points and have prepared responses for each. In fact, those who enter debates without this, don't do very well. I wonder if guys like Trump and Bush and other political figures simply adlib every presentation they enter into...or if they spend time studying what they might be asked, and prepare responses for those inquiries.

You will build bad habits? Well...that depends on how you prepare doesn't it. To have complete spontaneous responses both with language and with violence, you need to have a thorough repertoire of words, statements, and tactics to reverse the discussion. A bad habit would be to attend the event so unprepared that you have an emotional response rather than an intellectual one. By far the worst bad habit I see in debaters and in fighters is the thought that somehow they will pull the correct response out of their rectum in the nick of time by not preparing properly for the event they face.

You can't predict the attack, and adversaries are unpredictable? Actually that is false. They are very predictable in a real fight...or a debate. Each party enters into contact with an agenda. Identify the agenda and you identify possible ways they may seek to attain that objective. Then you group those methods into collective "avenues of attack" (verbal and physical are the same). Once those are understood and identified, you develop countermeasures for them and practice them to the point where they are ingrained in your thinking and habituated in your actions. You can access them mindlessly.

How do you do that? I think you know the answer to that question. It is not in "free form practice". It is not in "sparring". It is via intentional and contextual practice of those things repetitively and in combination with other similar themed responses in a manner that is easy to train, recall, and preserve.

And that my friends is the modern definition of...wait for it...a kata.