THE IMPORTANCE OF "WHY" - REACTIVE WEAPON MANIPULATIONS 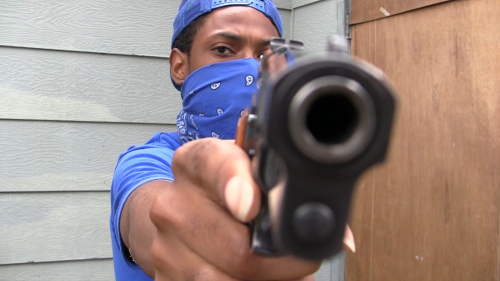 The first installment of this was quite contraversial, specially in the groups that uses competition shooting as a basis for gunfight training. Please understand that there is nothing wrong with sport shooting, but sport shooting is not gunfighting any more than collegiate fencing is street knife fighting. And to use one as a basis for the other is a recipe for ultimate failure. Now here is the thing that many forget. If you make a mistake on the game fields, what happens? Nothing. You shrug, hopefully get a redo, and try to ignore your friend's laughter. But if you make a mistake in a gunfight, which ostensibly is why you carry a pistol CCW, the results will be far more dire.

So let's look at the situation. A bad guy pulls his pistol, points it at you and begins trying to kill you. If you do nothing, you are dead. If you try something and fail, you die. That's it.

So, having been trained properly, you explode off the line of fire, pull your blaster and start trying to kill the other man right back. But somewhere along the line, your pistol stops working. Visually focused on the muzzle flashes coming your way and moving quickly, you press the trigger hard but the loud report and the feel of the pistol firing in your hands is absent.

So some questions before we proceed, because we need to get our minds right about this. Why? Because anything is possible on the shooting range when only your ego is on the line. Those same possibles may not be possible when your attention is down range, you are moving rapidly to avoid being hit, and your weapon has stopped working.

1). Do you think you will know automatically, 100% without fail, by feel, under fire and under duress, what has happened with your pistol?

2). If the answer to number one is even a partial "no", do you think in the scenario I described above that you will be able to analyze what the problem is and select the correct solution based on your examination to bring your weapon back into the fight quickly?

If you answered "yes", I will call you a liar and ask that you show us in high pressure force on force. You see, we know what is humanly possible in a fight, and it is vastly different than what is easily done in the controlled environment of the shooting range. If on the other hand, the honest answer to these questions is a "no", we have a viable solution for you. 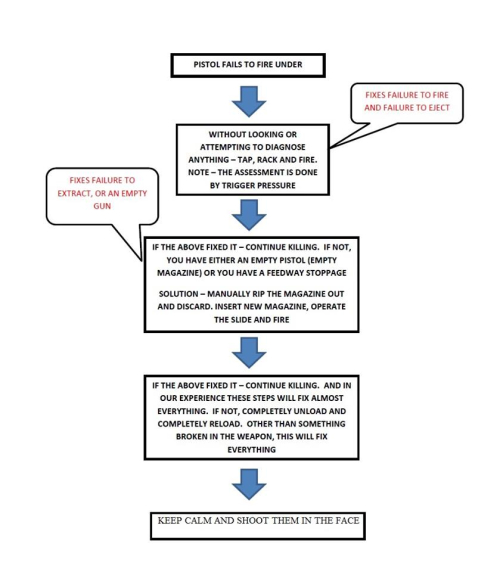 This solution process does not require looking at the pistol, any mechanical or technical analysis, can be trained as a reactive flow, is goal driven and verified by a gunshot. It can be done on the run, with eyes downrange, and in complete darkness.

Look at the flow chart. It begins at the top and flows to the bottom, being interrupted only by the sound of your gunshot signifying a successful clearing of whatever stoppage you faced.

If the pistol stops working, TAP - RACK - FIRE. We don't "tap rack assess". That is an Internal Affairs silliness that crept into the mix in the 1990s. You have no time to asses...clear it and fire at the bad guy to make sure it worked. That maneuver will instantly clear a failure to fire as well as a failure to eject. If it does not clear the malfunction, you move to the next solution.

RELOAD THE GUN. The maneuver is the same as what we do in the Proactive Reload, but without any attempt to secure and retain the on board magazine due to the demands of the event. We manually extract the magazine as the firing hand presses the magazine release button, let it drop out of our hand as we access a new magazine. Magazine is inserted and the slide is operated over the top whether it has locked open or not.

This will fix the situation where the pistol is empty and did not lock open on the last round, or when it has, either way. It will also fix the dreaded "feed way stoppage" that the uneducated call a double feed. Those are in actuality "failures to extract". Again, upon clearance, you fire at the bad guy to verify it solved the problem.

If you screw all of the previous up, and the weapon is still non-functional, UNLOAD IT AND RELOAD IT. Magazine out, retain in the hand since it may be your only magazine. Cycle the slide a few times (a few is more than once). This in essence unloads the weapon completely. Reinsert the magazine, cycle the slide again to reload, and fire at the bad guy.

All the foregoing can be done, on the run, looking at the target, in about three or four seconds.