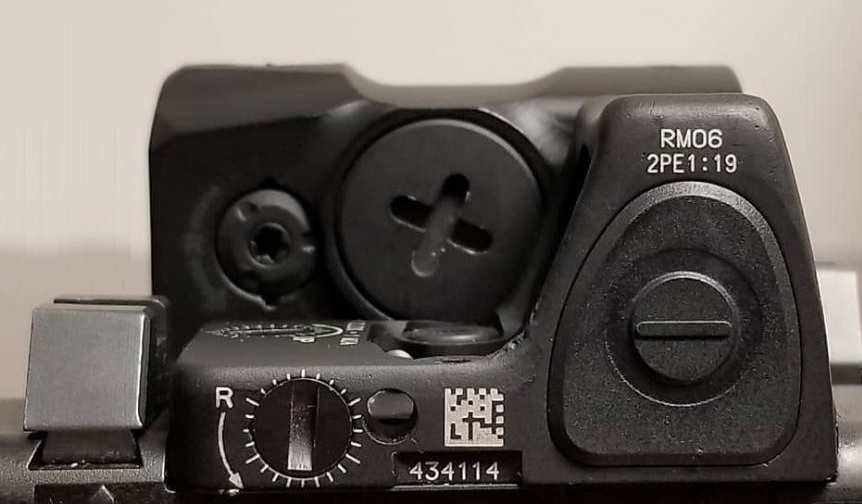 THE TRUTH ABOUT THE AIMPOINT ACRO

Those who need to get done with an article in 30 seconds...don't waste my time...and don't let me waste yours. Those who know how to read...you are welcome to continue. Written in conversational, un-PC, style.

I started my fighting career in 1970 in old school full contact karate (different from "traditional"). I got my nose flattened in front of my squeamish mom at 13. I earned my black belt at 16 and was awarded third dan in the hardest school of karate in the USA and in front of the founder, Mas Oyama, when I was twenty. When I mention breaking people's legs with kicks and shit like that...well...it could be that I know a thing or two (as the commercial says) because I have seen (and done) a thing or two. Old school karate is what I learned, what worked, what I taught when I decided to follow the teacher's path...and what I used on the street against thugs on a nightly basis for fifteen years.

When I was teaching, and the Kung Fu craze stirred the imagination of every wannabe Kwai Chang out there, schools all over the land changed their signs and taught Kun-Fu. What did I do? I stayed with what worked. Kung Fu was interesting, but it was not better, and in fact, gave up alot of strength to be what it was. Same for the Tae Kwon Do craze, and the Ninja craze. My God...you could not swing a dead cat without hitting some ninja or another hiding in a bush. Old school full contact street proven Karate. That I am still here and healthy is proof that it is a sound strategy.

But whiskey-tango-foxtrot does that have to do with the new "Game Changer" in optics (according to Canola Larry), you might ask?

We started the Trijicon RMR between the sights in a milled slide pocket back in 2010. Look it up...use the way back machine or the flux capacitor or whateverthef*ck. You cannot change history today. Edison would not have gotten away with his shenanigans on Tesla in this day and age (snowflakes have no idea who those guys are do you?).

The Trijicon has been proven over, and over again. And mind you I am not a Trijicon lick-spittle. From a dealer perspective, they are an extremely difficult company to do business with. From a customer perspective, they are angelic. But with the Type 2 RMR any possible issues with batteries failing has been resolved and they are the final best answer right now - June 2019 (some ten years after we began this journey). The Leupold has failed to overtake them...Vortex has failed...Burris is the haven of those on welfare...and SIG Romeo Optics...please...POS does not mean "positive".

Trijicon is the king of the hill in this realm. I have yet to test an SRO, but I doubt it will surpass the regular offerings. I am not interested in the least in open carry competition-centric guns, and for the last thirty years I have been an advocate that the gun that you carry in your duty belt is the gun you must carry when you go home. Or at least a very close analog of it.

"Gabe...what on earth does any of this have to do with the Aimpoint ACRO that all the Youtube Guri are getting orgasmic about, and that Famous Dude himself said was a "game changer"? Come on man...get with it...everyone thinks its better than the dumb old RMR"

Comments Posted On Various Social Media From reviewers outside our tribe - we didn't write these...outsiders did who bought the ACRO bright eyed hoping to trash their Trijicon RMRs.

1). With a factory battery my ACRO ran about 8 days on full brightness.

2). Battery is dead — it was left on, one or two clicks down from max. I would say to turn it way down or off when not in use.

3). This is unacceptable for how this product is intended to be used.

4). A month, one or two clicks down from max, maybe even less, is my best estimate of how long this Acro went.

5). This level of battery performance isn’t going to cut it.

7). I find setting 7 to be sufficient with my white lights. Outside, during the bright midday sun setting 8 is the bare minimum with 9 being better. The advertised battery life numbers are turning out to be pretty meaningless.

8). Setting 6 gets washed out by white lights. Need at least setting 7 or 8 at night. Setting 6 isn't bright enough outdoors during daylight, in any amount of light.

9). People are having to replace batteries in weeks, not months, let alone years. Setting 9 will kill a battery in 10 days.

10). With how much people talk crap on optics like Eotech who has a projected run life of 600 hours on a usable daylight bright setting (exps 3-0). The Acro on the same setting is going what? like 300 hours maybe on a usable setting?

11). The battery issue makes it unacceptable for patrol work

12). Should I need to bump up battery changes now to every two weeks, I would be very disappointed, but not particularly shocked.

13). The optic should be capable of being left on for extended periods with zero concern about it working. There should be some faith in the company’s claim, as well. Suggesting a 1.5 year battery life but getting less than 30 days on it is not good.

14). If I need to draw the gun outside of practice, it's likely going to be in a hurry and I'd prefer the optic wasn't stuck in condition 3.

So where does that leave things? I could not care less who makes what optic...really I don't. I openly engage in corporate espionage, and have industry insiders on my payroll so that is something new (and better) is in the offing...I can move ahead of it, copy it better, or whatever. It is what I do and I could not care less if it upsets anyone. And if the truth was brought out, it would be known that other companies do the exact same thing. THE EXACT SAME THING.

If I thought something was better than what we were using...a new red dot for example...and I realized that if we didn't get ahead of this we would be smoked…I would obtain a red dot in question - by hook or by crook - or a slide somebody else had milled for it - take it to the machinists and tell them to copy it. And within 6 weeks we would have Gen 3, 4, and 5, G17, 19, 34, 26 and 43s for it on the shelf in Melonite Black, NP3, and any shade of LGBT Rainbow Cerakote you could imagine. There is no unity, there is no cause, there is nothing...profit is the goal and any gun company that tells you different is either lying, a non-profit...or will be out of business soon.

When I saw the ACRO for the first time I shook my head and wondered what the hell Aimpoint had been thinking or what buffoon they had been listening to...or who they thought would benefit from this?

The way the industry works is this - They look at the offerings in a market, buy them, and dissect them like a dead mouse. They study what is patented and whether the company has the where-with-all to defend that patent. Then they begin copying and modifying what they can get away with. If they can, they steal key employees from another firm...like a large gun company that suddenly go into the red dot pistol market a year or so ago did. Then they find an industry celebrity - hopefully with a large following - hopefully on youtube - and they give him a bunch of free samples to promote for them. From repurposed canola oil to "gamechanger" red dot sights, the message is sent out and the product is sold.

And if it has flaws, a large company has paid apologists that will populate forums and facebook sites to explain and smooth over any issues.

Look kids...unless we are talking about an 8" barreled 44 magnum with a sling on it, a pistol that is “not for concealed carry” is useless. PISTOLS EXIST BECAUSE THEY CAN BE CONCEALED - OTHERWISE WE WOULD BE CARRYING SHOTGUNS.

When I hear “its not for concealed carry” it is as if that bottle of old single malt was not for drinking...or the race car was not for driving…or the hot super models was…but I digress.

And changing the battery once a week? Huh? Didn't Aimpoint make a name for itself with the Aimpoint Micro...still the best rifle and SBR red dot on the planet? And it did so with a run time of 50,000 plus hours. I have a half dozen SBRs and other similar weapons and the Aimpoint Micro on them is always on in ready to use mode. The oldest one has been on for some three years now.

Are they really expecting us to nod open mouthed in submissive agreement that changing the battery even monthly – much less weekly - is acceptable?

No Aimpoint and its shills...it is not.

I don't know...I think those are gamechangers alright...for failure.