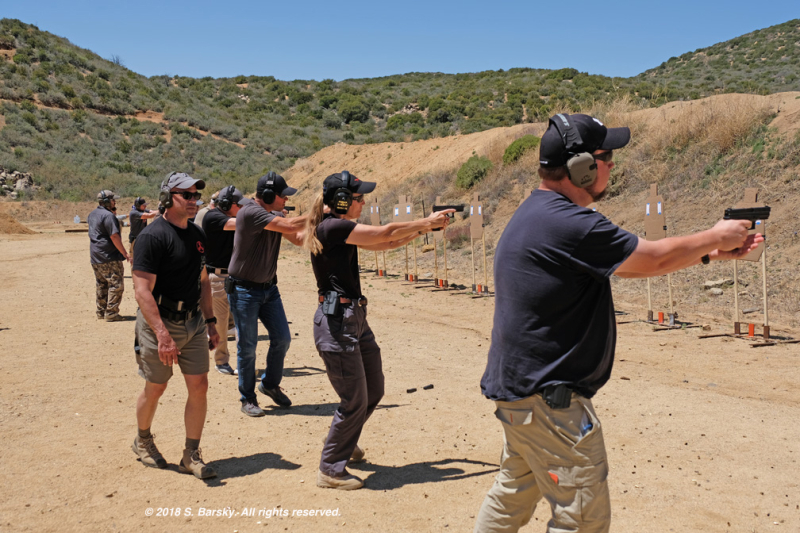 Things to Look For in a Shooting Instructor

Firearms training seems to have become the “Nail Salon Business” for men. Everyday there are more new schools and classes. Much like the “Karate Kid” craze in the 1980s when you saw everybody that could afford a set of black pajamas and a set of stripes on their belt suddenly opening a school to cash in. I plan to get into some detail on what to look for in a fighting instructor. Notice I said “fighting” instructor and not “shooting” instructor? The reason I made the distinction is that shooting and fighting are not quite the same. Shooting is a part of fighting, but rarely is fighting a part of the shooting instruction you see today. My focus and that of my readers is gun-fighting and self-defense, not competitive shooting – and the two are quite different. Different enough in my opinion that they can be considered separate disciplines. The discussion of attributes is for fight teachers.

What makes a great instructor – and subsequently what you should look for when searching for one.

1). Personal fight knowledge and life experience – How on earth is anyone going to teach violence if they have no experience in it? Anything they share they found elsewhere and thus their actual knowledge and experience is often less than that of the students. But experience in violence is worthless if they are unable to convey those lessons and build material from them.

This is where the world of sport and combat diverge. The shooting range, whether in a formal sport setting or informal practice setting, has limits to what you are permitted to do. There is a reason for this, but those limits are not present on the street or the battlefield. Often the methods for sport creep into the practice of self-defense. Those methods are not optimal for fighting and were developed to fit the “rules of the venue”. An instructor that speaks the language of violence will see that and prevent those things from taking place in his own repertoire as well as in his classes. But the filter of violence must be there to keep it real. The instructor with personal experience in violence knows that sport and fighting are not the same things.

2). Articulate speech and writing – We all know the guys that have killed more people than texting while driving, but who are totally unable to put what they know into words or lessons. I recall one very experienced instructor with multiple tours to all manner of places describing the fundamentals of shooting and “watch the sights and tighten the groups”. That was it. While he was a great guy and the stories after hours were fantastic, there was no teaching going on and students left no better skilled than they arrived.

We also see many YouTube Gunfighters – These are the guys who have never been in any sort of fight (gun or fist) – We see that all the time. They are the modern-day version of the trick shooters of old. The objective is entertainment not instruction. Showing things on video has begun to erode the ability to write well and to explain things. Part is the ever-shrinking attention span of Americans. The thinking is that one can learn from a video so why bother writing or speaking. But the learning that happens with a video is superficial if it is not accompanied by verbal explanation and practical exercises. If the instructor has fantastic gun juggling feats on video, but can’t teach you how to draw you pistol and shoot a bad guy in the face, he is useless to you.

Are you paying $500 to be entertained, or to become a better gun fighter? Let the answer guide your spending. A great instructor must be able to write, speak, and show in the same articulate way.

3). Ability to pass on the ability they possess – An instructor must know how people learn, and what it is about his material that is the most difficult to teach them. He must know how to organize a lesson plan for a course of instruction so that the lessons of his life and the methods that those lessons gave birth to will be learned by the student. The goal must be to make the student better, to give him new and better skills, or a better understanding of the nature of the conflict. Training must be handled as if that night, the students were going to be in a gunfight. This is how articulate speech is implemented in a logical sequence to deliver instruction. Sadly most trainers today focus on one thing only – the applause attained from clever entertainment.

4). Physical Appearance And Ability -(command presence, fitness, real world applicable skills, etc.) - In 2012 I told my staff that they needed to lose their guts or find another place to teach. I would not have any man with a beer gut (man fetus) wearing my colors and representing my school. Yet today you can almost picture in your mind the stereo-typical overweight, non-physical gun trainer.

Command presence is paramount. It is analogous to “physical respect” and is made up of poise, speech and physical appearance among other things. Another way to describe it would be “Physical Leadership”. The sloppy dude with the gut will have a much more difficult time attaining that than will the fit and muscular instructor. So will the skinny kid with a frail upper body in a child sized shirt. Moreover, the fit and muscular instructor can physically do everything he teaches, which is an essential thing.

5). Stays current – The world moves on, technology improves and new developments see the light of day. A great instructor uses modern technology, but does not rely on it to do his teaching for him. The same goes for equipment. A great instructor knows that high quality gear will allow a student to advance to a high level sooner and with less resistance. And when he teaches, he does so with the most modern top tier quality equipment available.

The instructor that shows up with a WW1 vintage 1911 in a low slung leather rig and proceeds to discuss the fine points of the weaver stance has not stayed current. As one example, recall the now-forgotten resistance of the mass of the gun media to the use of Red Dots on pistols ten years ago. But conversely, staying current does not mean adopting what the sport shooters do without filtering through the life experience of the street fight and that is why point number one is so important. The man without any firsthand knowledge of doing violence to other men will adopt anything as new and better…even when it is not. The focus of the great instructor is to continue to make himself stronger, faster and more dangerous than he was the day before. And in doing so, provide his students with a path to attain those same attributes.

There are more characteristics of a great instructor, and I address all of them in my instructor classes, but these five will do for now. More to follow soon.