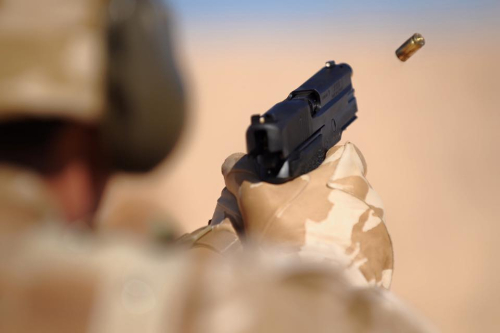 Back in the 1980s the triggers on SIGs and Berettas and S&Ws were heavier than today...or maybe we are stronger today. I don't know. I came to the DA Semi Auto from the DA Revolver so the first shot was not a big deal to me. One rolled through the trigger in one continual and constant motion on the way out and the shot broke just as the last sight verification was made.

But we did work on those DA triggers quite a bit both in dry work and in the gunsmith shop. I tracked down a relatively unknown 'smith named Steve Deladio who ran the Armory at Long Beach Uniforms. He tuned my S&W 686 to ridiculous smoothness and when I used the S&W 5906 I did the same. Steve gave it a fantastic double action pull that could be rolled through like the best revolvers.

I never knew that the first shot was so "difficult", or that the transition from double action to single action was such a "problem" until I attended Gunsite and was told as much.

My "crunchenticker" I was told, would slow me down and hold me back and I would be lucky to be alive when bullets began flying. Cooper was a clever wordsmith and had a way of using dry humor that was often taken as gospel by the holster sniffers of the day. It was clear that he didn't care for the double action having been focused on the 1911 for so many years. He suggested two possibles. He was serious only about one. We spoke about this some time later in depth, but the serious option was to thumb cock the hammer on the way out. The other was to fire the first shot into the dirt and then go single action from there. The inference was that the only option for one that simply could not operate a DA was to thumb cock the hammer.

His words - "The drawback of the crunchenticker is that if the trigger finger is correctly placed for the crunch it is wrong for the tick, and vice versa." Actually I disagree with that premise as we do not run DA Pistols like SA pistols and vise-versa. But like the joke whose punchline is not understood, many of his devotees actually began teaching the "shot into the dirt" method. Note that nobody used that in class because I think we all got it.

Cooper actually favored the method I discussed earlier which was to roll through the trigger like a revolver, but he mentioned that the large girth of most of these double stack pistols, combined with the nature of the triggers prevented many shooters from being able to do so unless they spent a great deal of time developing the hand strength and skill.

Both Carlos Askins and Elmer Keith were proponents of cocking a DA revolver for long or premeditated shots. I had read of this and was incorporating it into my skill set when Cooper validated it. The inclusion of that was what allowed me to defeat all comers at the shoot off in 1990....the first target being a head shot on a Pepper Popper at some 15 yards as I recall.

So the premise of operation is simple. Double action is the default. But when there is time, such as for a long shot, a shot requiring extreme precision, or a premeditated shot (different from an emergency shot at close range), the Keith-Askins-Cooper...and Suarez suggested method is to thumb cock the weapon and take it in single action.

Hardly was a career-driven academy instructor will ever teach a gaggle of marginally dedicated recruits, nor what a sales-rep-shooting-instructor will teach at an industry sponsored class, but like it or not that is the most efficient way to operate these triggers.

And I did just that with my SIG P-226 and my S&W 5906 from those days until the advent of the Glock at my agency in 1996. When I drew the pistol, if there was time, my hammer was ALWAYS back. If clearing a building, pointing in on a suspect, or anything preemptive or planned, I was in fact on single action. And contrary to the fear-motivated, liability-mongers of then and now...nothing bad ever happened and only the bad guys were shot.