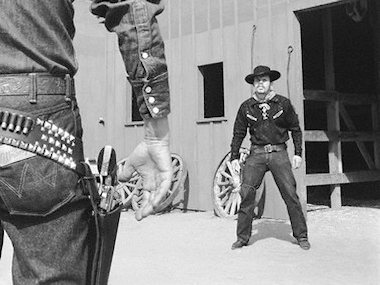 Timing is More Important Than Speed!!

It is not about speed, it is about timing. This is something the speed focused gun sports maniacs will never understand as their only adversaries are the timer and the cardboard. My adversaries...the ones I am training to face are flesh and blood and they hate me and want to kill me. So I am not driven by speed, but rather by timing.

What helped me defeat the active shooter, the robbers, the armed home invaders, the gang members, and all the bad guys I faced? I wasn't faster than they were...but my timing in the continuum of the fight was impeccable due to my training and application of concept. Yet another facet of the fight that is impossible to even see in the clinical and isolated world of gun sport. I learned timing from Karate, not from Gunsite. Here is what Karate Timing is like -

Go no sen: Go no sen means to "receive" the attack, block it physically and then attack the opponent after their attack has finished. For example, an enemy throws a punch at my face, I block that attack and then throw a counter punch. In gunfighting and opponent fires a shot and misses - you draw and shoot back (hopefully hitting him).

Sen no Sen: Sen no sen is a block and simultaneous counter attack while the enemy is attacking. For example, the enemy throws a punch at my face and at the same time, I block that punch while I myself punch him. The timing here is very important because both people are committing to the attack at the same time. In gunfighting, the enemy draws and fires at you. You see his draw materializing and as he fires you move off line and shoot him as his shot misses you. The timing is his shot...then your shot.

Sen sen no sen: Sen sen no sen is attacking and counter attacking the opponent while they are attacking. The enemy throws a punch at you. You evade the punch without needing to touch and counter punch him at the instant his punch would have hit you. In gunfighting, you see his draw beginning and move to the diagonal drawing as he draws, and shooting as he shoots. He misses because you are no longer where he fired, and you shoot him at the same time. The timing is two shots at the same time...one hits.

Deai: The concept behind deai is sensing the enemy is about to attack. The attack begins in the mind...you will see physical tells if you have studied humanity and had sufficient experience and training. As the attack begins to materialize, but not fully...or when you sense it is materializing, you preempt his attack with your own. In gunfighting, the enemy has given every indication, articulable and clear, that he is about to begin killing. Before his plans are birthed, you kill him first.

So forget all the speed silliness the sportsmen are so fond of. It is not about that. It is about your understanding of the flow and cycle of the dynamics of the fight, and your ability to exploit them and interject yourself at the right point in time.